Protesters have marched through central Algiers to demand Thursday's presidential election be cancelled.

A big crowd of protesters marched through central Algiers on Wednesday to demand Thursday's presidential election be cancelled, chanting that they would not vote in a poll they regard as a charade.

They chanted, "No election tomorrow" and held up banners reading "You have destroyed the country" as riot police stood blocking roads and a helicopter circled overhead.

In one place, a column of police barged through the crowd.

The election is shaping up to be a pivotal moment in the months-long struggle between the shadowy network of military, security and political leaders known as the "pouvoir," who have ruled for decades, and a leaderless street protest movement.

While the military, the dominant force in the pouvoir ⁠— "the power"⁠ — has cast the election as the only way to end the stalemate on the streets, the protesters reject it as a sham designed to maintain the status quo.

They say no election can be free or fair while the old guard of rulers remain in power and the military stays involved in politics. No foreign observers are in Algeria to monitor the vote.

Whoever is elected after Thursday's first round and a potential run-off later this month will face a series of hard decisions, with declining energy revenue leading to a planned 9 percent cut in public spending next year.

The deadlock between the enormous protest movement and a state increasingly dominated by the military has put at stake the political future of Africa's largest country, a nation of 40 million people and a major gas supplier to Europe.

All five of the state-approved candidates running on Thursday are former senior officials linked to the former president Abdelaziz Bouteflika whom the army forced aside in April in response to the protests.

In the Kabylie region, the fiercest arena of the 1990s civil war between the state and insurgents, almost all businesses and government offices are closed in a general strike in support of the protesters and against the election.

"The baker and pharmacy are the only open shops in the village," said Mezouane Azouz, a resident of Haizer in the Kabylie region.

Army chief Lieutenant General Ahmed Gaed Salah, who has emerged as Algeria's most powerful political player since Bouteflika was ousted, has pushed for Thursday's vote as the only way to resolve the political crisis. 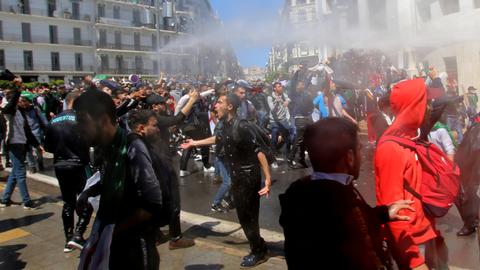