Turkish President Recep Tayyip Erdogan arrived in the central African nation of Chad on Tuesday for a one-day visit aimed at deepening ties between the two countries.

Erdogan was welcomed at the airport in the capital N'Djamena by Chad’s President Idriss Deby and members of his Cabinet.

Erdogan’s visit to Chad is the second stop on a three-nation African tour,  which includes Sudan and Tunisia.

The visit, the first-ever by a Turkish president to Chad, will be dominated by discussions on business and investment.

Turkey's imports from Chad in the first 10 months of 2017 totalled $26.9 million, while exports stood at $14.9 million, according to the Turkish Statistical Institute (TurkStat). 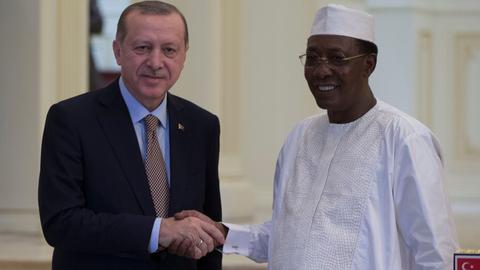