A dead body of a foreign mercenary was found south of Tripoli, Libya’s capital, the country’s Foreign Ministry said on Saturday.

In a statement, the ministry said the Libyan army found the dead body in an area in the Salahaddin region, which was cleared of militias loyal to warlord Khalifa Haftar.

The concerned security units and judicial authorities are carrying out a joint investigation to clarify the facts related to the foreign mercenary, it said.

After completing the investigation, the Libyan Foreign Ministry will submit the report on the matter to the United Nations Security Council as an additional evidence for the presence of foreign mercenaries in Libya, the statement added.

Separately, the press centre of Libyan army-led Operation of Volcano of Rage shared a photo featuring a Russian-made MON-100 type anti-personnel mine seized in the same region.

Meanwhile, Libyan government said on Saturday they seized three barracks from Haftar's militias in south of the capital.

"Our forces have regained control of the Yarmouk, Hamza and Al-Sawarikh camps," south of Tripoli, said GNA spokesman Mohamad Gnounou.

Gnounou, in a statement, said Haftar militias fleeing, but GNA forces "continue to pursue" them.

Following the ouster of late ruler Muammar Gaddafi in 2011, Libya's government was founded in 2015 under a UN-led political deal.

The Libyan government has been under attack by Haftar's forces to capture Tripoli since April 2019, with more than 1,000 killed in the violence.

The government launched Operation Peace Storm on March 26 to counter attacks on the capital. 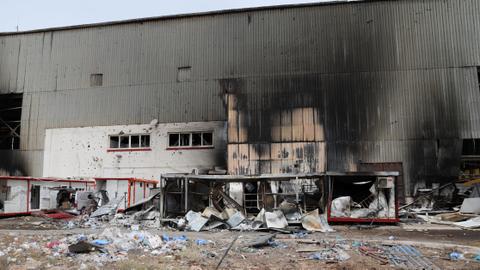