In a ceremony that Kenya's government warned would be treason, opposition leader Raila Odinga on Tuesday was sworn in as "the people's president" during a mock inauguration protesting President Uhuru Kenyatta's new term after months of deadly election turmoil.

The government cut live transmission of the country's top three TV channels as a huge crowd of tens of thousands gathered in a Nairobi park for the event.

Though police were withdrawn without explanation from Uhuru Park, a heavy police presence remained in the capital's slums, which are opposition strongholds. Odinga said he felt vulnerable attending the "swearing-in" after his security was withdrawn.

The 73-year-old Odinga took an oath holding a Bible over his head, amid cheers. The opposition leader called the ceremony a step toward establishing a functioning democracy in Kenya, East Africa's economic hub.

"We are seeing the return of an authoritarian, imperial presidency in our country and rule by fiat, and this must be resisted," he told the Kenya Television Network ahead of the ceremony. Afterward, he updated his Twitter profile to call himself "President of the Republic of Kenya."

Odinga, 72, a veteran opposition leader who claims he has had three elections stolen from him, has refused to accept Kenyatta's re-election, which came after a deeply divisive 2017 polls season in which rights activists say at least 92 people were killed.

First was an election on August 8, won by Kenyatta, which was annulled in a historic decision by the supreme court, which ordered a re-run on October 26.

Claiming the poll would not be fair, Odinga boycotted the second vote and Kenyatta won with 98 percent.

Odinga postponed a previous effort to swear himself in last month, but his party insisted on Tuesday's event.

"We intend to hold a peaceful event, in total compliance with the constitution and the law," read a statement from the National Super Alliance (NASA) coalition.

"We nonetheless wish to put the Jubilee [party] administration on notice that we will accomplish our mission come hell or high water."

Attorney General Githu Muigai warned last month that any 'swearing-in' would be treasonous, raising the possibility of Odinga's arrest, a move that would heighten tensions.

"Let them have the park and carry on with their political activities as long as it is within the law," a senior officer said.

The US advised Odinga against the 'inauguration'.

Since boycotting the re-run poll, citing a lack of reform at the election commission, NASA's strategy has been to challenge Kenyatta's legitimacy by seeking to establish parallel government structures.

Opposition politicians have convened so-called people's assemblies in some counties and the inauguration of Odinga as the 'people's president' is seen as the culmination of this process.

So last night the chair and vice chair of the Kenya Editors Guild released competing statements disputing whether the gov had threatened to shut down media who cover opposition swearing-in. Today, 2 independent TV stations & 1 radio station shut down.

Kenya's editors guild released a statement on Monday night saying that Kenyatta and his deputy William Ruto had summoned media managers and editors, threatening to "shut down and revoke the licences of any media house that would broadcast live" the swearing-in.

One of the country's main television and radio broadcasters, Citizen TV — which had been covering the event — reported online mid-morning that its transmission had been switched off by the communications authority. 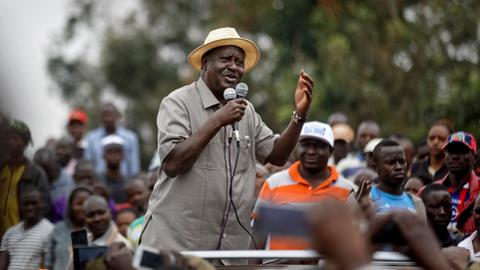 Kenya's Odinga asks for guarantees ahead of poll rerun