Chanting "freedom, peace, justice," the rallying cry of the protest movement that has rocked Sudan for weeks, demonstrators took to the streets in both capital Khartoum and its twin city Omdurman.

"Riot police are firing tear gas at protesters in north Khartoum but they are still demonstrating," a witness told AFP news agency, declining to reveal his identity out of fear for his safety.

The Sudanese Professionals Association, which has headed the protest movement, has called for daily demonstrations but few have been reported in recent few days.

On Wednesday, the army's chief of staff, Kamal Abdelmarouf, said the armed forces were ready to face those who destabilised the security of the Sudanese people.

We discuss the arrest and release of Sudan opposition leader's daughter and the reasons behind it pic.twitter.com/5mKkZcnCKz

The demonstrations began in the farming town of Atbara on December 19 over the government's decision to triple the price of bread.

They quickly mushroomed into nationwide protests widely seen as the biggest threat to Bashir's rule since he took power in 1989.

Anger has been mounting for years over deteriorating living conditions and growing economic hardship in the east African country.

Sudan's economic woes triggered mass protests in 2013 that were put down at the cost of dozens of deaths.

Officials say 30 people have died in violence related to the latest protests.

Human rights groups say children and medics have been among more than 40 people killed since December 19.

Earlier, addressing a rally in the eastern town of Kassala, Bashir slammed his opponents' use of social media to mobilise protests.

"Changing the government or presidents cannot be done through WhatsApp or Facebook," Bashir told the crowd.

"It can be done only through elections."

Bashir was speaking in Kassala, not far from the Eritrean border, and he told the rally he was reopening the border crossings after a year-long closure which had hit the area's economy. 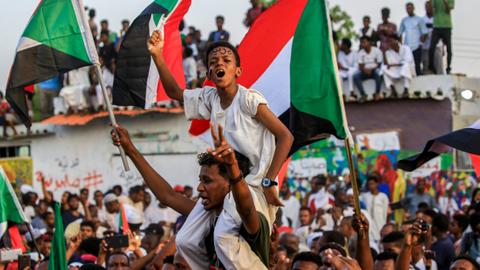