When the world is battling to stem the spread of coronavirus or Covid-19 pandemic, African country Rwanda is employing drones to eradicate another killer disease malaria. But this aerial spraying which began on March 10 has brought environmentalists face to face with health activists.

Dismissing fears of green activists, health officials say the aerial spraying has proved precise and effective in killing the larva that spread malaria.

According to the latest world malaria report, released in December 2019, 228 million cases of malaria were reported in 2018, with 405,000 deaths. The African continent is home to 94 percent of malaria deaths.

Living in a swampy area in the Gasabo district, farmers like Coltida Mukakimenyi are pinning hopes on drone spray technology, expecting that it may save them from the killer disease. The mother of three children, malaria has devastated her family.

“It is common to have all my children suffer from malaria at least once a month because we live near swamps and I partly blame myself for not taking mosquito nets,” she said.

It is the same story for Maria Mukamana, 35, living in Rugenge village, in the same swampy Gasabo district. Living in the wetlands  a mosquito breeding ground – at least once in two months one of her family members gets infected with malaria.

The single mother of two children is among the 10 million Rwandans who are covered by the Community Based Health Insurance, locally known as CBHI. But she complains that this does not cover her primary needs of food.

Both the lady farmers rue that they had not registered for a free mosque net, distributed by the government last year.

This is not the first time that Rwanda has turned to technology to improve access to healthcare services.

In June 2016, Rwanda became the first country in the world to use drones developed by Zipline, a Silicon Valley company, to deliver blood samples to health workers on the ground. The technique reduced the time from four hours to just 15 minutes, as ambulances had to negotiate with treacherous roads.

“Mosquitoes have become resistant to the indoor sprays, thus continue to survive in the open environment.

This means they continue spreading the disease, especially among young people who spend more time out in the evenings,” Aline Uwimana, manager at the Rwanda Biomedical Centre, told Anadolu Agency. The centre is part of the National Malaria Prevention Unit.

The pilot phase has started in six high-risk zones by the Charis UAS, a local drone company, at a cost of over $63,070, replacing manpower and logistics that were employed to do indoor residual spraying.

According to health workers, the hand-spraying would mean employing 500 men for three days to pump anti-malarial chemicals in one hectare of marshland.

“With technology, we cut costs in logistics and human error and use of chemicals will be minimised. We are taking our battle inside mosquitos-breeding areas instead of waiting for them to grow and infect people,” says Health Minister Daniel Ngamije.

According to Ngamije, the program is expected to decrease malaria infections by 90 percent over the next nine years.

He said that in Rwanda, malaria-related deaths were already showing a decrease from 663 annually in 2015 to 264 cases in 2018. It has been largely attributed to community health workers, who were able to handle 57 percent of the three million cases reported each year. 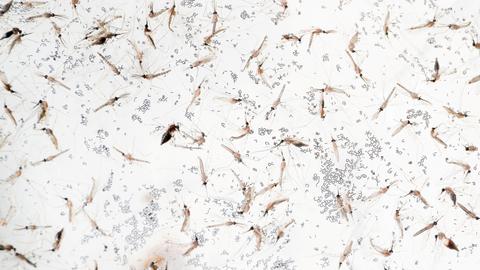