The 37-year-old Diane Rwigara, who had denounced the charges related to her election challenge of President Paul Kagame as politically motivated, had faced 22 years in prison if convicted.

Rwanda's high court on Thursday acquitted the country's most prominent opposition figure, Diane Rwigara, of all charges related to her election challenge of President Paul Kagame, with judges saying the prosecution failed to provide evidence of insurrection and forgery.

The case has drawn global attention as Kagame again faces pressure to give more space to critics in this highly controlled East African country.

Rwigara's mother, Adeline, 59, also was acquitted of inciting insurrection and promoting sectarianism. Both had denied the charges.

The courtroom, packed with diplomats and supporters, erupted in applause as Diane Rwigara and her mother were overcome with tears.

Excited relatives who had prayed before the hearing for protection swarmed them with hugs.

The 37-year-old Rwigara, who had denounced the charges as politically motivated, had faced 22 years in prison if convicted. She was arrested after trying to run in last year's election, and is the rare person to publicly criticise the government from inside the country.

US senators in recent days urged Rwanda's government to drop the charges, with Sen. Dick Durbin noting "what appears to be highly questionable charges against Rwigara for seemingly running for office peacefully."

In response, Rwanda's justice minister told reporters that courts should not be pressured by third parties.

The three-judge panel said there was no proof that Rwandans had been incited against the state after Rwigara's remarks to the media, and that intercepted WhatsApp audio files of her mother did not incite insurrection and instead were private conversations.

Some Rwandans in the capital, Kigali, said they were shocked by the court's decision. "I thought the government was angered by Rwigara's criticism and she would be convicted," said Moses Hirwa, a mechanic.

'Ready for any outcome'

Speaking to The Associated Press ahead of her court appearance, Rwigara remained defiant, saying no amount of pressure will silence her.

"I hope to be cleared of all these made-up charges but I am ready for any outcome," she said, calling the courts unpredictable and lacking independence.

Kagame is praised for leading Rwanda's recovery from the 1994 genocide and for advances in economic development and women's rights, but critics say he does not tolerate criticism. His government rejects such accusations.

The government in September pardoned thousands of prisoners, including an opposition party leader and a political activist, and several analysts said Kagame was loosening the country's political space.

Rwigara last year acknowledged the risks of running against Kagame, one of Africa's longest-serving leaders. Soon after she announced her intention to run, nude photos purportedly of her that she said had been manipulated were published on social media in what her supporters called an effort to undermine her credibility.

Rwigara later was disqualified from running, with the government saying she lacked enough supporting signatures and had forged some of them.

Kagame won a third term with more than 98 percent of the vote. 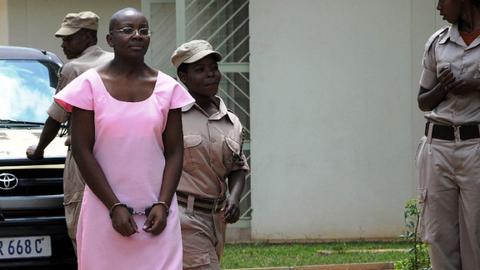