Sudan's protest leaders and army rulers have agreed on Saturday to establish a joint civilian-military council as they met to discuss demonstrators' demands for a handover to civilian rule, a protest leader said.

"We agreed on a joint council between the civilian and the military," Ahmed al-Rabia, who was involved in the talks, told AFP. "We are now in consultation about what percentage of the council should be represented by civilians and how much by the military."

Sudan's Transitional Military Council (TMC) ousted and arrested former president Bashir on April 11 following months of protests, saying it would rule for up to two years ahead of elections.

Anti-Bashir opposition groups and protesters, who have kept up a sit-in outside the defence ministry, want a civilian-led transitional council with military representation. Under an umbrella group known as the Declaration of Freedom and Change Forces, they met the TMC on Saturday to try to resolve the stand-off.

"Today we have taken positive steps and we expect to reach an agreement satisfactory to all parties," said Ayman Nimir, an opposition negotiator.

"We expect to receive a response from the military council regarding the formation of a sovereign council within hours."

"God willing the talks will continue this evening and we are very optimistic that we can reach a final result and announce it to the Sudanese people," he said.

The TMC has dismissed and arrested some former officials, announced anti-corruption measures and promised to give executive authority to a civilian government, but has previously signalled that ultimate authority will remain in its hands.

Bashir was overthrown and detained by the military after 16 weeks of protests triggered by a deepening economic crisis. 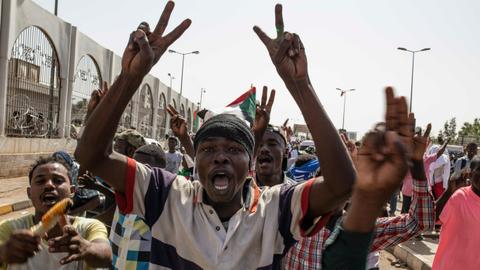 Sudan opposition pushes ahead with two-day strike from Tuesday