Often traumatised by the conflicts and violence they are fleeing, children face the risk of drowning on sea crossings, malnourishment and dehydration, trafficking, kidnapping, rape and even murder, says UNICEF.

Nearly 50 million children have been driven from their homes across the world by conflicts, often falling into dangerous situations as they flee in the hope of finding a better life elsewhere, according to a report by UNICEF.

The report, entitled 'Uprooted: The Growing Crisis for Refugee and Migrant Children', said that more than half of the children in the study have been uprooted by conflicts.

As conflicts and poverty continue to displace people across the globe, the number of refugees increases everyday. Children make up more than half of the world's refugees, UNICEF figures show.

The report, released on Wednesday, said 28 million children have been driven from their homes by violence and conflict within and across borders, including 10 million child refugees who fled their country, 1 million of whom are asylum-seekers whose refugee status has not yet been determined. An estimated 17 million children have additionally been displaced within their own countries.

Apart from being traumatised by the conflicts and violence they are fleeing, children are extremely vulnerable as they face further dangers along the way.

The dangers include risk of drowning on sea crossings, malnourishment and dehydration, trafficking, kidnapping, rape and even murder.

But these are not the only difficulties displaced children face. They often face xenophobia and discrimination in the countries they travel to, said the report.

In the worst cases, according to the report, xenophobia can escalate to direct attacks. In Germany alone, authorities tracked 850 attacks against refugee shelters in 2015.

Last year, the world was shocked by the image of four-year-old Syrian toddler Aylan Kurdi whose body was found washed up on Turkey's western coast while trying to reach Europe with a boat.

One year since Aylan Kurdi was pictured washed up on a beach and NOTHING has changed for Syrian children. pic.twitter.com/VOmYOU07Bm

More recently, the image of a dazed and confused five-year-old, Omran Daqneesh, who was seen in a video covered with dust and blood while sitting on an ambulance chair after his family home was destroyed in an air strike in Syria also sent shockwaves around the world.

"But each picture, each girl or boy, represents many millions of children in danger – and this demands that our compassion for the individual children we see be matched with action for all children," UNICEF Executive Director Anthony Lake said in reference to children like Aylan and Omran.

The report suggests some actions to help refugee children, including promoting measures to combat xenophobia, discrimination and keeping families together as the best way to protect displaced children.

It also recommends keeping children in education and giving them access to healthcare and other services.

"What price will we all pay if we fail to provide these young people with opportunities for education and a more normal childhood? How will they be able to contribute positively to their societies?" Lake asked.

"If they can't, not only will their futures be blighted, but their societies will be diminished as well."

In terms of population, roughly one in five people in Lebanon is a refugee. Turkey, meanwhile, hosts the largest total number of refugees in the world with nearly 3 million.

In wealthier countries, however, refugee numbers are much lower. In the United Kingdom, one in 530 people are refugees, while in the US the figure is one in 1,200 people. 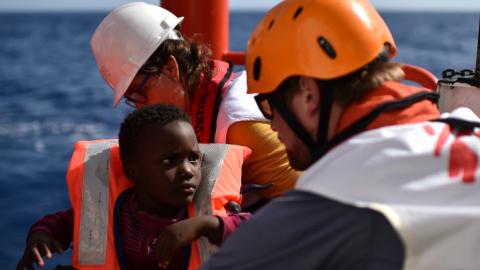