Bahamians begin rescues as Dorian moves on toward US coast

At least seven deaths were reported in the Bahamas. The storm's punishing winds and muddy brown floodwaters severely damaged thousands of homes, crippled hospitals and trapped people in attics.

Bahamians rescued victims of Hurricane Dorian with jet skis and a bulldozer as the US Coast Guard, Britain's Royal Navy and a handful of aid groups tried to get food and medicine to survivors and take the most desperate people to safety.

Airports were flooded and roads impassable after the most powerful storm to hit the Bahamas in recorded history parked over Abaco and Grand Bahama islands, pounding them with winds up to 295 kph (185 mph) and torrential rain before finally moving into open waters Tuesday on a course toward Florida.

People on the US coast made final preparations for a storm with winds at a still-dangerous 175 kph (110 mph), making it a Category 2 storm.

In the Bahamas, Red Cross spokesman Matthew Cochrane said more than 13,000 houses, or about 45% of the homes on Grand Bahama and Abaco, were believed to be severely damaged or destroyed. UN officials said more than 60,000 people on the hard-hit islands will need food, and the Red Cross said some 62,000 will need clean drinking water.

At least seven deaths are reported

At least seven people have been killed in the Bahamas by Hurricane Dorian, Prime Minister Hubert Minnis said on Tuesday, after the storm delivered a devastating blow to the islands.

Minnis said an additional two individuals had died, saying "that would take the number of deaths to seven."

"We can expect more deaths to be recorded," he added.

Weakening slightly but still packing a powerful punch, Hurricane Dorian churned along the southeastern coast of the US.

"I can't see any way out of it," the Nassau Guardian newspaper quoted Dames as telling reporters.

Aerial footage of Great Abaco Island in the Bahamas broadcast by CNN showed scenes of catastrophic damage, with hundreds of homes missing roofs, overturned cars, widespread flooding and debris strewn all over.

"This was a crisis of epic proportions," Dames said. "Maybe the worst that we've experienced, certainly in our lifetime."

The runways at Grand Bahama International Airport in Freeport, the island's largest city, were under water, complicating rescue and recovery efforts.

The online Bahamas Press published video of flooding in the Rand Memorial Hospital in Freeport and said patients had been forced to evacuate the facility.

The US Coast Guard sent MH-60 Jayhawk helicopters to Andros Island in the southern Bahamas to help with search and rescue operations as residents trapped in their homes by floodwaters issued distress calls.

Bahamas Press published pictures and the names of people who have been reported missing by their relatives on Abaco island.

British sailors were also rushing in aid. A few private aid groups also tried to reach the battered islands in the northern Bahamas.

The US Coast Guard airlifted at least 21 people injured on Abaco.

The Miami-based National Hurricane Center (NHC) said the core of the hurricane "is moving nearly parallel to, but offshore of, the east coast of Florida," while President Donald Trump warned people against complacency.

"The US may be getting a little bit lucky with respect to Hurricane Dorian, but please don't let down your guard. As it heads up the coast, lots of very bad and unpredictable things can happen!" he tweeted.

"On the other hand, the Bahamas have been devastated," he wrote.

Dorian, which has dumped as much as 76 centimetres of rain on the Bahamas, was downgraded Tuesday morning to a Category 2 hurricane on the five-level wind scale.

But it remained an extremely dangerous storm as it moved along the Florida coast.

A state of emergency has been declared up and down the east coast for millions of US residents potentially in the path of the storm.

The Pentagon said 5,000 members of the National Guard and 2,700 active-duty troops were ready to help out if needed.

Some have lost everything

At 2300 GMT, Dorian was packing maximum sustained winds of 175 kilometres per hour, the NHC said.

It said Dorian was expected to turn toward the north on Wednesday evening.

This will be "followed by a turn toward the north-northeast Thursday morning. On this track, the core of Hurricane Dorian will move dangerously close to the Florida east coast and the Georgia coast tonight through Wednesday night," it said.

Yasmin Rigby, a resident of Freeport in the Bahamas, told AFP that "most of the island is still flooded" and it was "still raining with gusty winds."

"I am still getting calls from people calling for help," Rigby said. "I cannot move from my apartment. Thankfully we have sufficient supplies."

In Coconut Grove, Florida, which has a sizeable population from the Bahamas, residents were collecting supplies for hurricane victims.

Robinson said seven seaplanes were on standby to deliver the supplies "when the weather permits."

Robinson said some church members have family who were "devastated by the storm."

"Some have lost everything they own," he said. "Their homes, any forms of transportation, businesses. They have absolutely nothing."

Henry Gomez, who was visiting Florida from New York, was among those dropping off supplies. "I feel bad for the Bahamas, what they're going through right now," Gomez said. "We all have to chip in and help." 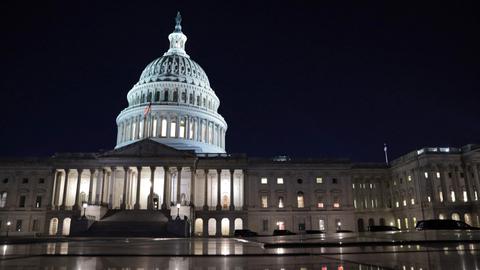