Sixty-year-old FARC rebel Cesar Gonzalez must now return to a society he barely recognizes after three decades fighting in the remote mountains of Colombia for a Marxist revolution.

A peace deal unveiled on Wednesday between Colombia's government and Revolutionary Armed Forces of Colombia (FARC) was aimed at ending half a century of war and will allow the rebels to set up a political party and seek power peacefully.

The peace deal that will be submitted to a nationwide referendum on October 2.

The council met behind closed doors two days after the Bogota government and rebel representatives announced they had reached a final peace deal to end decades of conflict.

The United Nations intends to set up a special mission in the South American country to monitor the ceasefire, help disarm the rebels and verify compliance with the peace deal.

But reintegrating 7,000 fighters of the FARC, many of whom have spent at least half their lives at war, will be a crucial part of making the peace deal work, and it is no easy task.

"The world has changed so much - technology - we are out of date, but we must get up to speed," said Gonzalez, who says he left his wife and their four children and took up arms to prevent being killed for his Communist beliefs in the 1980s and hasn't seen them since.

He knows little of iPhones, the Internet or even washing machines.

"In those days telephones had dials," he said, laughing at how out of touch he is with modern Colombia.

Returning guerrilla groups to society at the end of civil wars is always difficult and the challenges are even bigger in Colombia because the conflict has gone on for so long.

Gonzalez, who teaches Marxism at a FARC camp high in Colombia's Cordillera Oriental, or Eastern Mountain Range, says he has no regrets about his guerrilla life and is preparing for a new life in community politics.

Even for some younger rebels, like 33-year-old Gissella Mendoza, civilian life may be tough.

Trained as a medic during her 20 years in the FARC's ranks, she has saved lives, amputating limbs and stemming bleeding from major wounds. But it is unlikely she will be able to practice her field when she demobilizes.

With only a fifth grade education, little money and most of her life hidden from society, she would need to start from scratch and learn alongside much more privileged students.

"God willing, I'll be able to continue, what else can I do?" she says, a 9 mm pistol strapped to her waist. "It would be so hard."

The rebels' base is extremely remote, accessible only with a three-day journey by mule - fording furious rivers and climbing rock faces.

The camp itself is a hodge podge of wooden structures that run along planks stretched across the mud. Fattened pigs loll at the entrance and blustering wind competes with the constant whir of a generator.

FARC fighters here say they are optimistic a binding end to the war is possible but would not flinch at returning to armed struggle if the government shirks on its commitments to protect demobilizing rebels, allow the rebel group to enter politics and invest in rural areas.

"If the government fails to meet its obligations, we will take up arms again," said Gabriel Mendez, 32, an 18-year veteran who teaches peace accords to the rebels and worries they may be targeted by death squads.

Fear of being killed is real. During a previous peace process in 1985 thousands of former FARC rebels and supporters were assassinated by paramilitary groups.

A repeat of that violence seems unlikely now, but some guerrillas are wary. They know how to obtain weapons, and disarming as part of the accord would be easily reversible, said one rebel who asked that his name not be connected to such comments.

Under the peace deal, the FARC committed to disarm, end its involvement in the illegal drugs trade and provide reparations to its victims.

For now, the rebels believe peace will hold and they will be able to compete for power at the ballot box.

"Peace will allow us to talk; we want to talk," said Leiber Ramires, 38, a soft-spoken rebel commander dressed in olive green fatigues and rubber boots. "Colombians have been sold a story that we're diabolical - we aren't and we want to form a political party that will allow us to fight alongside society."

The fighters listen in silence, except for the constant coughing, to Leiber's lecture before standing in line for breakfast, then another class. The teachings seem archaic for a post-conflict Colombia and Latin America's fourth-biggest economy.

"We are revolutionaries," said Ramires.

When asked about their future, the rebels say they want to be involved in a political solution. They expect to live off funds from international aid.

Few talk about government programs for reintegration or see any problem entering the work place after decades at arms.

"We will await orders from our leaders, see what they tell us to do," said 28-year-old female fighter Amalfi, her nom de guerre, who has been in the ranks since she was 17.

The rebels patrol the valleys beyond the camp and cook rice, beans and pork in the kitchen's clay oven. They bathe in ice-cold mountain water and sleep on frames of tree trunks filled with leaves. The forest provides privacy for their toilet needs.

Food arrives at the camp by pack mules. Every month, sacks of potatoes, toiletries and other staples are strapped to the beasts which totter along slippery mountain paths.

The FARC has for decades used proceeds from extortion and the illegal drugs trade to fund its war.

"We have more than most Colombians, we have food," said Amalfi, who wants to seek out her family as soon as possible.

Women make up about 30 percent of the camp and while they carry the same weapons and wear the same uniforms as men, they also use colorful hair accessories and makeup. Permission is required from the camp's commander for sex between fighters.

The 51st front and the nearby 53rd, a two-hour hike on foot, form part of the FARC's feared Eastern Bloc. Both have seen their fair share of war.

When the FARC tried to seize the capital Bogota in 2001, rebels from here were stationed in surrounding towns until a hardline offensive spearheaded by then-President Alvaro Uribe pushed them back into the inhospitable mountains.

They suffered nightly bombing raids that they remember as the worst time of the war.

A bilateral ceasefire agreed in June means camp life is easier now. Smoking is permitted past 6 p.m. and torches guide the way along slippery walkways.

The final accord, which still needs to be signed and put to voters in a referendum, will test the country's tolerance. Both sides are suspicious of each other and many Colombians despise the FARC because of its involvement in drug trafficking and kidnappings.

"We were born civilians. We took up arms out of necessity and if the state isn't careful we will return with pain in our souls," she said. 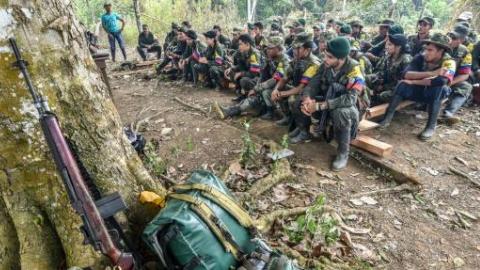 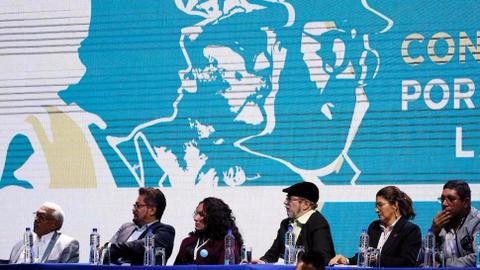