Emergency comes as the number of identified coronavirus cases in the US capital reaches 10 and officials recommended gatherings of 1,000 or more people be postponed or canceled.

Washington, DC Mayor Muriel Bowser declared a state of emergency Wednesday as the number of identified coronavirus cases in the nation's capital reached 10 and officials recommended gatherings of 1,000 or more people be postponed or canceled.

The announcement signals a major escalation in the District of Columbia's response to the spread of the virus.

Bowser declared both a state of emergency and a public health emergency. The declarations give her the authority to order medical quarantines, request federal assistance and take steps to stem price gouging for critical supplies.

The city has leased a building as a potential quarantine facility. Officials declined to disclose the location.

Organizers of the popular Cherry Blossom festival, which was scheduled to begin March 20 and traditionally attracts throngs of visitors to the nation's capital, announced that several events would be postponed.

“It is a difficult decision and one that we do not take lightly, said Diana Mayhew, President and CEO of the National Cherry Blossom Festival.

The vast majority of people recover from the new virus.

According to the World Health Organization, people with mild illness recover in about two weeks, while those with more severe illness may take three to six weeks to recover.

Earlier Wednesday, officials recommended that all “non-essential mass gatherings, including conferences and conventions,” be postponed or canceled through the end of March in light of the coronavirus outbreak.

They defined mass gatherings as “events where 1,000 or more people congregate in a specific location.”

The announcements have massive implications for Washington's many museums, events and performance venues. The city's St. Patrick's Day parade has been postponed, and Eileen Andrews, a spokeswoman for the Kennedy Center for the Performing Arts, said they were assessing the city's recommendation.

Lauren Lyons, a spokeswoman for the Smithsonian network of museums, said in an email: “As of now the Smithsonian is continuing to welcome guests to our museums and scheduled public programs as normal.”

Monumental Sports & Entertainment said that Washington Capitals hockey and Wizards basketball games would be played as scheduled before spectators and that other events at Capital One Arena would go on “at the direction of their respective promoters.”

Events DC, which operates the Walter E. Washington Convention Center, is suspending operations there from March 13 to March 31, disclosing that five people who attended the recent AIPAC conference had tested positive for the coronavirus, up from the two that AIPAC had publicly reported.

Events DC President Greg O'Dell said he was working with the Capital City Go Go, the G-league affiliate of the Wizard, to come up with alternatives for the three games scheduled during the rest of March. Events DC also owns Nationals Park, home of the reigning baseball world champions.

With an opening game scheduled for April 2, O'Dell said the decision on whether to hold it would lie with the team and the DC government.

“Right now we just want to move forward with proactive measures and prioritise the health and safety of our staff and our guests,” he said.

The announcement came a day after American University in Washington made a similar move.

As with American University, the Georgetown dorms will remain open, but students are encouraged to return home instead of staying on campus.

Georgetown has reported no suspected cases of coronavirus infections on campus. However, the university hospital is treating Washington, DC's, first identified victim.

In Washington, the Rev Tim Cole, rector of Christ Church Georgetown Episcopal church, identified himself over the weekend as the city's first patient.

City officials asked several hundred people who entered the church on days when Cole was present and symptomatic to quarantine themselves.

Two subsequent positive infection cases, one living in Washington and the other in Virginia, have been Christ Church parishioners.

The church has canceled all services and activities indefinitely.

Cole released an open letter to his parishioners on Tuesday, saying he was improving slowly.

“Being the first point of outbreak in Washington obviously required strong measures, but I fully understand the inconvenience, and I deeply apologise,” Cole wrote.

The District of Columbia has reported four positive virus cases, although that number doesn't include people who may have been infected in Washington but live in nearby northern Virginia or southern Maryland.

For example, Loudoun County, Virginia, has reported a positive case in a local resident who is a Christ Church congregant.

Some Washington schools have closed for one day to enable deep cleaning.

The district's public school system on Wednesday announced it would move a planned professional development day for teachers and staff from March 20 up to Monday to focus the day on virus-related training and preparation.

About a half-dozen members of Congress are on a 14-day self-quarantine after coming in contact with potentially infected people.

On Tuesday, Virginia Democratic Rep. Don Beyer announced he would self-quarantine after dining 10 days ago with a person who tested positive for the virus. 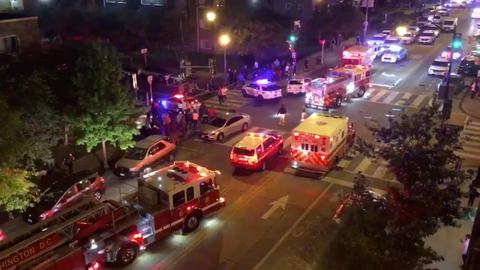