The blast occurred as fuel thieves were tapping an oil pipeline in a small town in the Mexican state of Hidalgo.

The number of people who died in a gasoline pipeline explosion in central Mexico late last week has risen to 96, government officials said on Tuesday, from 91 reported a day earlier.

The explosion last Friday occurred after hundreds of people crowded in to collect gasoline gushing from a pipeline that had been ruptured by suspected fuel thieves near to the town of Tlahuelilpan in the state of Hidalgo.

Forensic experts inspected and photographed the remains while soldiers and other military personnel guarded the cordoned-off area that was littered with half-burned shoes, clothes and containers used by people to collect fuel.

The leak was caused by fuel thieves illegally tapping the pipeline in a small town in the state of Hidalgo, about 100 kilometres north of Mexico City, according to state oil company Petroleos Mexicanos, or Pemex.

Video footage showed dozens of residents near the town of Tlahuelilpan gathered to collect spilled fuel in buckets, garbage cans and other vessels.

Fuel was seen spouting dozens of feet into the air from the tap. Footage then showed flames shooting high into the air and the pipeline ablaze.

Pemex attributed the blaze to "the manipulation of an illegal tap."

President Andres Manuel Lopez Obrador has declared an offensive against fuel theft, and on Friday he called on all branches of government to assist the victims.

"I am deeply saddened by the suffering in Tlahuelilpan," Lopez Obrador wrote on Twitter. He called on his "whole government" to extend assistance.

"There was a report that residents were on the scene trying to obtain fuel," according to a police report. Two hours later, the pipeline burst into flames.

Journalist Valeria Leon Cavagna has more on the incident.

It is not the first time such an accident has occurred.

In December 2010, authorities blamed oil thieves for a pipeline explosion in a central Mexico near the capital that killed 28 people, including 13 children.

Lopez Obrador launched an offensive against the $3 billion per-year fuel theft industry after taking office Dec. 1. Thieves drilled about 12,581 illegal taps in the first 10 months of 2018 and the country has deployed 3,200 marines to guard pipelines and refineries.

The new administration has also shut down pipelines to detect and deter illegal taps, relying more on delivering fuel by tanker truck. But there aren't enough trucks, and long lines continued on Wednesday at gas stations in several states. 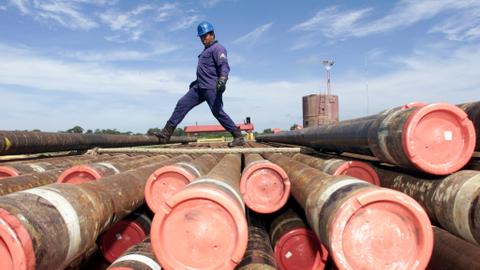