Governments across the world began investigating possible financial wrongdoing by the rich and powerful on Monday after a leak known as ‘Panama Papers' containing four decades of documents from a Panamanian law firm that specialised in setting up offshore companies.

The scandal has embarrassed several world leaders and shone a spotlight on the shadowy world of offshore companies.

Documentation that "would establish the possible use of the firm for illicit activities" was searched for, national police said in an earlier statement. The firm is suspected of tax evasion and fraud.

Javier Caravallo, specialist in organised crime and money laundering, gave the command for police officers and patrol cars to gather around the company's building in the afternoon for the raid.

The law firm, which specialises in setting up offshore companies, did not respond to requests for comment on Tuesday.

Founding partner Ramon Fonseca earlier said the firm broke no laws and all of its operations were legal.

The leaks cover a period over almost 40 years, from 1977 until last December, and allegedly show that some companies domiciled in tax havens were being used for suspected money laundering, arms and drug deals and tax evasion.

According to the documents, 140 political figures - including 12 current or former heads of state - are involved in the alleged network.

The papers have revealed potential tax evasion and money laundering by prominent figures, including friends of Russian President Vladimir Putin, relatives of the prime ministers of Britain and Pakistan and of China's President Xi Jinping.

Iceland's prime minister had resigned after his name was listed as a beneficiary of an offshore company on the papers.

Russian President Vladimir Putin made serious claims that the US plotted the leak.

China has censored online forums and media to prevent names of relatives close to the leadership from circulating.

Wealthy citizens in Australia, France, India, Mexico, Peru, Spain and elsewhere face probes over suspected tax avoidance after their names figured in some of the 11.5 million documents.

British Prime Minister David Cameron's image has taken a beating for first denying but later admitting that he held shares in his late father's offshore fund and received money from his parents that may have skirted inheritance tax. 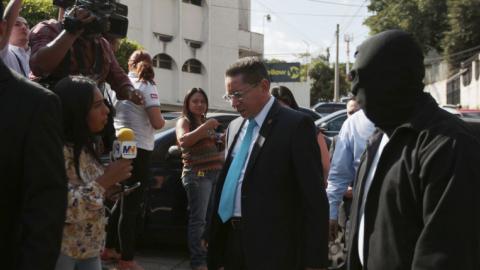