A US Air Force reconnaissance plane was intercepted by a Russian SU-27 jet in an "unsafe and unprofessional" manner while in international airspace over the Baltic Sea, the Pentagon said Saturday.

"The US aircraft was operating in international airspace and at no time crossed into Russian territory," Laura Seal, a Pentagon spokeswoman, said of Thursday's incident.

It came shortly after Russian aircraft repeatedly buzzed the USS Donald Cook this past week, including an incident Tuesday in which a Russian Su-24 flew 30 feet (nine meters) above the war ship in a "simulated attack profile," according to the US military's European Command.

Russia has denied the actions were reckless or provocative but they have been seen as exacerbating tensions between the rival powers.

"This unsafe and unprofessional air intercept has the potential to cause serious harm and injury to all aircrews involved," Seal said of the latest incident in a statement.

"More importantly, the unsafe and unprofessional actions of a single pilot have the potential to unnecessarily escalate tensions between countries."

The US aircraft in question was an RC-135 and the Pentagon said it had been flying a routine route.

"There have been repeated incidents over the last year where Russian military aircraft have come close enough to other air and sea traffic to raise serious safety concerns, and we are very concerned with any such behavior," the Pentagon said.

On Thursday, US Secretary of State John Kerry had strong words about the recent warship flyby.

"We condemn this kind of behavior. It is reckless. It is provocative. It is dangerous. And under the rules of engagement that could have been a shoot-down," Kerry said.

Kerry added: "People need to understand that this is serious business and the United States is not going to be intimidated on the high seas."

"We are communicating to the Russians how dangerous this is and our hope is that this will never be repeated," he said.

The Russian maneuvers began Monday while the destroyer was located about 70 nautical miles from the Russian base in Kaliningrad, a Russian enclave on the Baltic Sea.

One US defense official called the actions of the Russian planes "more aggressive than anything we've seen in some time."

The destroyer's commanding officer Charles Hampton told journalists in Lithuania that "very low, very fast" flybys were "inconsistent with the professional norms of militaries in international waters or international airspace."

But Russia countered the criticism, insisting it had observed all safety regulations.

The US military's European Command (EUCOM) released video showing warplanes zooming so close past the Cook that one sailor can be heard saying: "He is below the bridge wing," meaning the plane was flying lower than the highest point of the ship.

Ties between Russia and the West have plunged to their lowest point since the Cold War over Moscow's 2014 annexation of the Crimean peninsula from Kiev and its support for separatist rebels in eastern Ukraine. 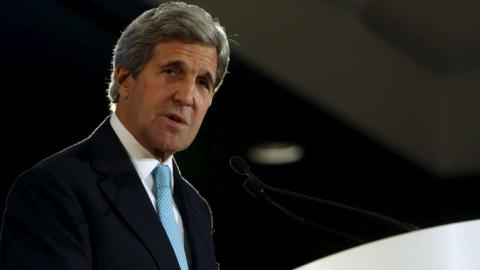