A justice department memo shared by the White House cites Comey's handling of the Clinton email probe as the reason for his sacking. Democrats accuse Trump of acting out of political motives as Comey was investigating Russia-Trump ties.

US President Donald Trump on Tuesday abruptly fired FBI Director James Comey, who had been leading his agency's investigation into whether the Trump campaign had ties to alleged Russian meddling in the 2016 US presidential election. Comey was fired via a letter delivered by a Trump aide.

Democrats immediately accused Trump of acting out of political motives related to Comey's Russia investigation, something the White House denied.

In a letter to Comey, Trump said the firing was necessary to restore "public trust and confidence" in the FBI. Trump made no mention of Comey's role in the Clinton investigation, which Hillary Clinton has blamed in part for the election result.

But in announcing the firing, the White House circulated a scathing memo, written by Deputy Attorney General Rod Rosenstein, which justified Comey's firing. The memo criticised Comey's handling of the Clinton probe, including the director's decision to hold a news conference announcing its findings and releasing "derogatory information" about Clinton.

Comey has come under intense scrutiny in recent months for his public comments on an investigation into Clinton's use of a private email server while she was secretary of state, including a pair of letters he sent to Congress on the matter in the closing days of last year's campaign.

As recently as Tuesday, the FBI sent a letter to the Senate Judiciary Committee to clarify misstatements Comey made on the matter last week during a testimony in which he overstated the number of emails allegedly mishandled by Clinton's top aide.

Trump told Comey in the letter he accepted the recommendation of Attorney General Jeff Sessions that he could no longer provide effective leadership. "While I greatly appreciate you informing me, on three separate occasions, that I am not under investigation, I nevertheless concur with the judgement of the Department of Justice that you are not able to effectively lead the bureau."

Comey was in California when he learned of his sacking.

Comey's term was to run through September 2023. Sessions advised Trump's campaign before being picked by the president to lead the Justice Department.

The White House said the search for a new FBI director was beginning immediately.

Since Comey had been leading an FBI investigation into allegations of Russian meddling in the 2016 US presidential election and possible collusion with Trump's campaign, his dismissal fuels concern about the integrity of the probe and renewed calls for an independent investigation.

"Trump praised him for the work on the email investigation, so that's not it," Austin Berglas, a former FBI supervisory agent on hacking cases, said. "I think [Trump] realised the extent of the Russia investigation under way and moved [Comey] out. To me, that's the only logical explanation right now," Berglas said.

"The reason they're giving for firing Comey doesn't add up," said a senior US official who has served in both Democratic and Republican administrations for more than 20 years.

"There has to be another reason, and I can think of only two possibilities. One is that despite the facts, the president considers Comey a political animal, and not a friendly species. The second is that he's afraid of a real investigation into his Russia business," said the official, speaking on condition of anonymity.

On Monday, former acting Attorney General Sally Yates told a Senate panel that she had informed the White House on January 26 that Trump's then-national security adviser, Michael Flynn, was at risk of blackmail by Moscow because he had been untruthful about his discussions with the Russian ambassador, Sergei Kislyak.

Democrats denounced Trump's move, which some compared to the "Saturday Night Massacre" of 1973, in which President Richard Nixon fired an independent special prosecutor investigating the Watergate scandal.

"Today's action by President Trump completely obliterates any semblance of an independent investigation into Russian efforts to influence our election, and places our nation on the verge of a constitutional crisis," said Representative John Conyers, senior Democrat on the House Judiciary Committee.

Senate Democratic Whip Dick Durbin went to the Senate floor on Tuesday to urge the White House to clarify whether the FBI investigation of Russian interference in the presidential campaign would continue now that Comey has been fired.

"Any attempt to stop or undermine this FBI investigation would raise grave constitutional issues," Durbin said. "We await clarification by the White House as soon as possible as to whether this investigation will continue."

US Democratic Senator Patrick Leahy has denounced Trump's firing of Comey, calling it "Nothing less than Nixonian."

"The decision ... raises profound questions about whether the White House is brazenly interfering in a criminal matter ... The same president who has called the investigation into the Russian hacking of our democracy and the potential complicity of his campaign a 'fake,' cannot pretend to have made such a decision uninfluenced by his concerns over Comey's continued involvement in the investigation," Representative Adam Schiff, the top Democrat on the House committee looking into possible Russian connections, said.

"Earlier this afternoon, President Trump called me and informed me he was firing Director Comey," Democratic Senator Chuck Schumer in remarks to reporters. "I told the president: 'Mr President, with all due respect, you are making a big mistake' ... Given the way the president has fired Director Comey, any person who he appoints to lead the Russia investigation will be concerned that he or she will meet the same fate as Director Comey if they run afoul of the administration."

Conyers and other Democrats renewed their calls for an independent commission or a special prosecutor to investigate Russian influence in the 2016 election.

During Comey's sworn testimony on his handling of the Clinton probe email on Capitol Hill last week, he told lawmakers that Huma Abedin, a top aide to Hillary Clinton, had sent "hundreds and thousands" of emails to her then-husband's laptop, including some with classified information.

But the FBI on Tuesday said in a two-page letter to the Senate Judiciary Committee that only "a small number" of the thousands of emails found on the laptop had been forwarded there while most had simply been backed up from electronic devices.

Most of the email chains on the laptop containing classified information were not the result of forwarding, the FBI said.

​Comey had said in July 2016 the Clinton email case should be closed without prosecution, but then declared - 11 days before the November 8 election - that he had reopened the investigation because of a discovery of a new trove of Clinton-related emails.

Clinton and other Democrats say they believe Comey's decision help cost her the election, as have other analysts, including Nate Silver of FiveThirtyEight, a news organisation focused on political data analysis.

He has spent three decades in law enforcement and has been no stranger to controversy. 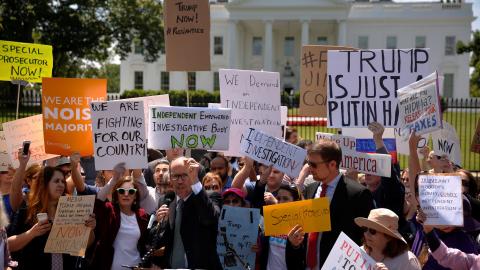 Trump is under fire over Comey and Russia