Remaning caravan migrants from Central America hopeful of entering the US

Trump had urged that the caravan be detained and repeated his call for stronger border security, writing on Twitter, "Our Southern Border is under siege."

Seventy men, women and children poured through a US port of entry early on Friday to seek asylum, the largest single group yet accepted by US officials from the caravan of Central American migrants that enraged President Donald Trump.

Fleeing Honduras, El Salvador and Guatemala, the migrants were among the last who had planned to ask for asylum, bringing the total to 228 who have crossed the border since last weekend.

The nearly 400 migrants who reached Tijuana last week faced wrenching dilemmas about whether to enter the United States and request asylum, beginning an indefinite and complex process that could end in deportation. Many decided to stay in Mexico for now.

After a month-long, 2,000-mile journey, their arrival at the border was hotly anticipated. US Attorney General Jeff Sessions beefed-up legal resources on the border this week to handle people from the caravan.

TRT World correspondent Ediz Tiyansan has been talking to the few remaining families at the border in Tijuana. 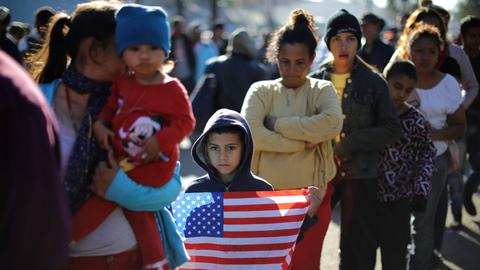