A lenient sentence that Brock Turner received for assaulting a young girl has reignited debate on the white privileges enjoyed by some in the US.

Brock Turner, whose six-month sentence for sexually assaulting an unconscious woman at Stanford University sparked a national outcry in the United States, was released from jail Friday morning after serving half his term.

The one-time Olympic hopeful swimmer walked out the main entrance of the Santa Clara County jail to the jeers and shouts of protestors.

Turner, who kept his head down, was carrying a large packet of hate mail sent to him during his incarceration.

His case exploded into the spotlight when a poignant statement from the victim swept through social media and critics decried the sentence as too lenient.

It prompted California lawmakers to pass a tougher sexual assault law and led to an effort to remove the judge from the bench.

The victim said it wasn't fair that Turner's loss of his athletic career was taken into consideration when sentencing him.

"The fact that Brock was an athlete at a private university should not be seen as an entitlement to leniency, but as an opportunity to send a message that sexual assault is against the law regardless of social class."

#BrockTurner released after 3 months due to his "good behavior". Too bad his vile behavior is already a life sentence for the survivor.

Turner, 21, was convicted of assaulting the young woman near a trash bin after they drank heavily at a fraternity party in January 2015.

The victim had passed out and Turner was on top of her when confronted by two graduate students passing by on bicycles.

They chased and tackled him when he tried to flee, holding him on the ground until police arrived.

Turner has been released before completing his six-month sentence because of his good behavior as per the rules for California inmates.

When his sentencing was announced in March it led to an uproar for its many contradictions.

The maximum sentence for his crime was 10 years while he got only six months. The girl's attorneys at the time were hoping for a jail term of at least 6 years.

The case highlighted white privilege in the US and biased coverage in mainstream media, which focused more on Turner's clean record than his crime.

Time's not mentioning him as a rapist didn't miss the attention of Twittersphere now either.

Our facebook community had some edits on @TIME's article #BrockTurner pic.twitter.com/R3QRTu8Bir

Police was also criticised for holding back his mugshot, which was leaked only at end of the trial. The initial pictures of a baby-faced Turner were in complete contrast to his police mugshot.

The case also brought under the limelight high number of sexual assaults on US campuses.

Turner hired an expensive attorney and fought the case instead of conceding and apologising, the woman said in the statement, which has been read over 18 million times according to BuzzFeed.

Public criticism of the judge who gave light sentence to Turner also continues.

After the judgement, people had started a campaign for Persky's removal.

Every sentencing I go to from now on in a drug case: "But your honor #BrockTurner did 3 months for rape."

Following backlash and the push for his recall, Persky voluntarily removed himself from hearing criminal cases.

Turner must register as a sex offender for life.

Greene County Sheriff Gene Fischer said Turner will have to report to a probation officer for three years and must avoid alcohol and drugs during that time.

Fischer said his department will notify Turner's neighbors informing them that a convicted sex offender is moving nearby. 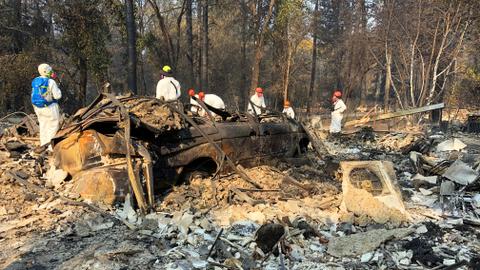 Frantic search goes on for missing after California wildfire

India warns against abuse of social media data in elections