Eight years at the White House as Obama, not the president

A not-so political look at the life of US President Barack Obama at the White House.

President Barack Obama's term is slowly coming to an end at 1600 Pennsylvania Avenue. The date of January 19, next year, will most likely be the 44th president's last day at the White House. He will move his belongings and make way to welcome the incoming president of the United States, leaving a note behind for him or her on the desk he has spent many hours working at in the past eight years, in the Oval Office. And then, perhaps, he will take a long slumber for a few months.

"I am going to take three, four months where I just sleep. And I hope you all don't mind that," the president said during a meeting at the White House.

Although there's still some time for his term to come to an end, questions have started to arise on whether Obama fulfilled the political promises he made to the public. However, let us put these questions aside for now and focus on what kind of man this great orator really is.

His love for Michelle

Firstly, we must admit, the two-term US president is madly in love with the First Lady, Michelle Obama. He has taken every opportunity to declare his ongoing love for his wife.

On Valentine's Day this year, he recited a poem to his wife on a TV show:

Michelle, this Valentine's Day I'm going to treat you right.

I'm going to make you some zucchini bread.

Then I'll spread out some veggies on a plate just the way you like them,

Then I'll give you a massage while you watch Ellen's Design Challenge on HGTV.

Because I love you so much. I Obamacare about you more than you even know."

He turned serious and added: "Michelle, I have made a lot of great decisions while President, the best decision I have ever made was choosing you."

"Thanks for putting up with me, I love you."

Michelle Obama isn't the only woman who has the president's attention. Obama is also devoted to his two daughters, Malia and Sasha Obama, which shows just how much he cares about his family.

Peter Marquez, the former director of space policy at the White House National Security Council shares a memory of the president.

"We were in the Oval Office for my departure photo with the President. My wife's parents and my toddler daughter came as well. He was very kind to my in-laws and made quick small talk with them. He then turned his attention to my very pregnant wife and asked her what we were expecting. My wife told him we were expecting a second daughter. So while my toddler is doing pirouettes in the middle of the office the President stops and begins discussing how much fun it is to have two daughters. He gave my wife a piece of advice and essentially said, ‘Don't get concerned about how messy your house gets. There will always be time to clean it. Just enjoy your daughters and spend time with them.'"

In an interview with GQ Magazine, Obama expressed his feelings about Malia and Sasha saying "Nothing beats watching your children become smarter and cooler than you are."

"And you suddenly will hear them say something or make a joke or have an insight and you go, 'Wow. I didn't think of that.'"

When he was asked if anyone has come to the White House to pick Malia up for a date, he said no one has come "But, I've seen some folks glancing at her in ways that made me not happy."

Do you tell the Secret Service to "just take out that guy over there," asked the interviewer.

"Just keep an eye on him," the president said.

The president never has second thoughts on letting his inner kid come out, especially when he gets together with children.

He's even chilled with them on the floor of the Oval Office.

In 2013, he refused to wear a football helmet, gifted by the US Navy football team, saying "You don't put stuff on your head if you're president… You never look good wearing something on your head."

But, when little princesses asked him to wear a tiara on his head? Well, that seemed to be okay for the president.

And what about rabbit ears? Cool, he is okay with that too.

Pete Souza, the official White House photographer said, "'Don't make rabbit ears,' the President said to a group of students before taking a photo with them. Which of course some of them couldn't resist doing."

People who have spent a good amount of time at the White House with the president say Obama is a very nice man who is interested in others.

An entrepreneur who had a chance to spend some time with the president says, "I've met Barack Obama on three occasions at political events. Each time I only had 30-45 seconds to chat with him, but seemed very personable and had that politician's skill of making you feel like [you're] the most important person in the world while you have his attention. He is very ‘in the moment' when he's with you."

Another man says, "I met Barack Obama in a completely non-political context while he was a senator. He came to speak to one of his friends, who happened to be one of my friends that I was spending some time with. So, when we met, he was completely off guard and just a regular dude. He introduced himself, shook my hand, smiled, told a joke, and talked to our mutual friend for a moment. He felt kind, genuine and somewhat professorial."

He cares about science, technology & innovation

In 2010, Obama hosted the first-ever White House Science Fair. He invited young scientists to share their ideas, projects and investments. Obama thinks youngsters are very good at science and technology, and the future of the nation.

"Science and technology helped make America the greatest country on Earth. Whether it's setting foot on the moon, developing a vaccine for polio, inventing the Internet or building the world's strongest military, we've relied on innovative scientists, technologists, engineers and mathematicians to help us tackle the toughest challenges of our time," he said during an interview.

Basketball's a passion of his

Basketball has always been his escape from everyday presidential pressures. It's his stress reliever and a way of clearing his mind, bringing him mental peace.

He has a witty side

It is hard to estimate how many times he's put a smile on our faces. This man has a comic sensibility that we're not very used to seeing in politicians.

Recently in an interview, he made a joke about Republican presidential candidate Donald Trump. When the GQ Magazine interviewer asked him "Which Game of Thrones character is Donald Trump?" he said "Uh…I don't think… I don't think any of them rise to that level." 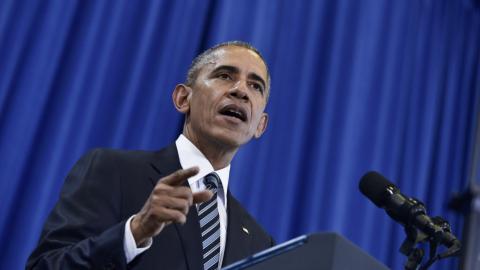