The US State Department said it plans to allow only 18,000 refugees to resettle in the US in the 2020 fiscal year, the lowest number in the history of the modern refugee program.

The Trump administration plans to dramatically lower the ceiling of a decades-old refugee resettlement program to 18,000 people from its current level of 30,000, the State Department said on Thursday.

"This refugee admissions proposal reaffirms America's enduring commitment to assist the world's displaced people, while fulfilling our first duty to protect and serve the American people," the department said.

The administration consults with Congress before finalising the policy change but in reality the decision-making power falls under the White House.

President Donald Trump has made cracking down on immigration, both legal and illegal, a core policy, guided by his hardline advisor Stephen Miller.

The current level of 30,000 is already the lowest since the programme's inception in 1980, while the number stood at almost 85,000 when Trump's predecessor Barack Obama left office.

"This is a very sad day for America," said David Miliband, CEO of the International Rescue Committee.

"This decision represents further damage to America's leadership on protecting the most vulnerable people around the world," he added.

The IRC added that the US currently has 30,000 people who have already undergone interviews for resettlement, far above the new ceiling, with 9,000 ready for travel.

The figure is separate from the 350,000 asylum claims the US expects to receive in fiscal year 2020.

Asylum seekers, like refugees, are fleeing persecution but present their applications in the US or at a US port of entry, while refugees apply from abroad.

In recent years the United States has been the world's top resettlement country, according to data from the UN Refugee Agency.

In 2018, the top five origin countries for the US programme were DR Congo, Myanmar, Ukraine, Bhutan and Eritrea, according to the Refugee Processing Center. 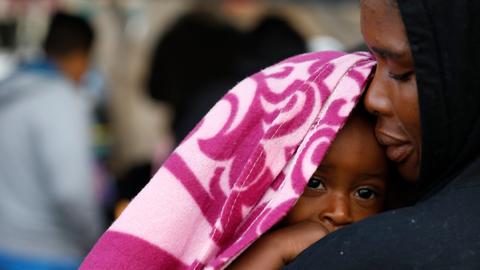