Trump’s administration has come under criticism over the federal relief effort in Puerto Rico falling short after a devastating hurricane two weeks ago.

President Donald Trump on Sunday defended US efforts to bring relief to storm-battered Puerto Rico, even as one island official said Trump was trying to gloss over "things that are not going well."

A day after Trump launched a Twitter attack against San Juan Mayor Carmen Yulin Cruz following her desperate pleas for more help, he tweeted that "we have done a great job with the almost impossible situation in Puerto Rico."

Trump said US military teams and the Federal Emergency Management Agency were doing "amazing work" and credited the island's governor and others for a "fantastic job."

But two weeks after devastating Hurricane Maria left much of the island without electricity, fresh water or sufficient food, many Puerto Ricans seemed to have a far gloomier outlook.

Hilda Lopez, in her 80s, broke into tears when approached as she left Mass at San Juan's Cathedral.

"It pains me that the president of the United States has expressed himself the way he has in recent days. I don't know if it's because he doesn't appreciate the pain" that Puerto Ricans are suffering.

“Looking for an excuse”

Trump, in one tweet on Sunday, said those who continued to criticize the relief effort were either "Fake News or politically motivated ingrates."

Mayor Cruz, in an interview with CNN, shrugged off the criticism. She told CNN that millions were still in dire circumstances, and that Trump seemed to be "looking for an excuse for things that are not going well."

Trump's criticism has drawn sharp retorts even from within his Republican Party.

"When people are in the middle of a disaster, you don't start trying to criticize them," Ohio Governor John Kasich, a presidential hopeful in 2016, said on CNN.

"You got to be bigger than the nonsense."

And Senator Bernie Sanders, an independent who ran for the Democratic presidential nomination in 2016, told CNN, "Speaking from his fancy golf club, playing golf with his billionaire friends, attacking the mayor of San Juan, who is struggling to bring electricity to the island, food to the island, water to the island, gas to the island, that is just – it is unspeakable.

"And I don't know what world Trump is living in."

Trump spent Sunday morning at his golf resort in Bedminster, New Jersey, before traveling to another golf course in nearby Jersey City to present the trophy to the winner of the Presidents Cup tournament. He dedicated the tournament trophy to all recent US hurricane victims.

"On behalf of all of the people of Texas, and ... if you look today and you see what's happening, how horrible it is but we have it under really great control, Puerto Rico," he said.

"And the people of Florida who have really suffered over this last period of time with the hurricanes," Trump said before presenting the trophy to US captain Steve Stricker.

"I want to just remember them, and we're going to dedicate this trophy to all those people who went through so much, that we love, that are part of our great state, really a part of our great nation," Trump said.

The Trump administration sent several top officials onto Sunday talk shows with the message that the relief effort is going well, despite complaints that the federal effort in Puerto Rico has fallen short of the work done after hurricanes ravaged Texas, Florida and Louisiana.

Long said the storms that struck Puerto Rico – Irma and Maria – greatly magnified the challenge for relief workers by damaging or wiping out some 3,200 roads or bridges.

Still, he said, "We [have] pushed everything into that island that we can."

The US Department of Defense meanwhile reported that it was continuing efforts to bring relief even to the most isolated communities, while repairing roads, ports and electrical networks, and reinforcing the badly eroded Guajataca dam. Only one-tenth of the island has cell service.

The Pentagon said 59 of 69 hospitals surveyed were partly or fully operational. The navy hospital ship Comfort is scheduled to arrive in San Juan on Wednesday.

Outside San Juan Cathedral on Sunday, 57-year-old retiree Aida Rosario said she, too, would welcome a Trump visit.

"Let Trump come, let him see how things are here, let him experience what we are going through," she said.

"There are people who can hardly eat – or maybe once a day. We are in difficult times." 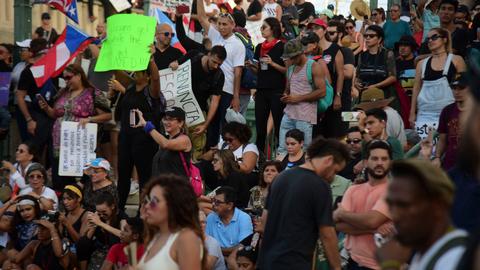 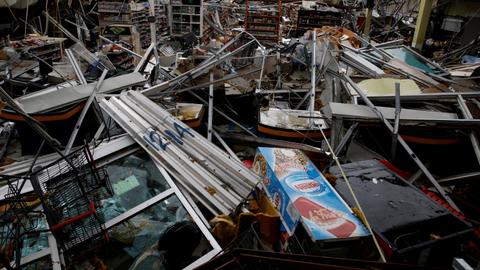