Donald Trump has attacked Britain's ambassador to the United States in an escalation of the tensions between the two countries after emails critical of Trump leaked.

Donald Trump assailed Britain's ambassador to the United States as a "pompous fool" and slammed outgoing premier Theresa May's "foolish" policies on Tuesday in a second straight day of virulent attacks triggered by the leak of unflattering diplomatic cables.

The missives threaten to plunge Washington and London into a rare diplomatic crisis and have landed their author, British envoy Kim Darroch — and by default his prime minister — in the US president's crosshairs.

Britain's Foreign Secretary Jeremy Hunt, who is running to replace May, responded that Trump's comments were "disrespectful and wrong" — in a marked departure from the more conciliatory tone struck by his leadership rival Boris Johnson, who declined to criticize the president's comments.

Trump initially reacted with restraint over the cables' weekend publication but the language has changed and heated passions do not seem about to subside.

The wacky Ambassador that the U.K. foisted upon the United States is not someone we are thrilled with, a very stupid guy. He should speak to his country, and Prime Minister May, about their failed Brexit negotiation, and not be upset with my criticism of how badly it was...

The US president's early morning wrath was not solely reserved for Darroch.

Trump doubled down in attacking May and her fraught Brexit negotiations, saying he told her "how to do that deal, but she went her own foolish way-was unable to get it done. A disaster!"

...handled. I told @theresa_may how to do that deal, but she went her own foolish way-was unable to get it done. A disaster! I don’t know the Ambassador but have been told he is a pompous fool. Tell him the USA now has the best Economy & Military anywhere in the World, by far...

London has been scrambling to stem the damage caused by the leaked documents, in which Darroch described the US leader as "inept" and his White House as "uniquely dysfunctional."

....thought of within the U.S. We will no longer deal with him. The good news for the wonderful United Kingdom is that they will soon have a new Prime Minister. While I thoroughly enjoyed the magnificent State Visit last month, it was the Queen who I was most impressed with!

By Tuesday, Trump was demanding that Darroch "speak to his country, and Prime Minister May, about their failed Brexit negotiation, and not be upset with my criticism of how badly it was handled."

Hunt offered his public support for the envoy, whose term expires in January, saying he would keep Darroch in place if he took office.

1/2 @realDonaldTrump friends speak frankly so I will: these comments are disrespectful and wrong to our Prime Minister and my country. Your diplomats give their private opinions to @SecPompeo and so do ours! You said the UK/US alliance was the greatest in history and I agree... https://t.co/hNeBWmyyVN

The cables' publication in the Mail on Sunday newspaper came just a month after Trump enjoyed a state visit to Britain punctuated by a 41-gun salute at Buckingham Palace and a banquet dinner with the queen.

The incident threatens to complicate London's efforts to strike a new trade agreement with the United States, seen as key to mitigating potential damage from Britain 's withdrawal from the European Union.

It also comes as British politics are in for a major revamp once May ends her three-year spell in power later this month.

British officials defended Darroch as carrying out his duties by providing "frank" accounts of developments in Washington.

"We have made clear to the US how unfortunate this leak is. The selective extracts leaked do not reflect the closeness of, and the esteem in which we hold, the relationship," the government spokesperson said.

The immediate suspicion of the London papers fell on Brexit-backing players in a power struggle within the governing Conservative Party.

Former foreign minister Johnson, a hardliner on Brexit, is the favorite to replace May in the leadership contest against Hunt.

During a stop at the Manchester airport, Johnson told reporters he had "no embarrassment" in saying he had a good relationship with the White House.

"I think it's very important that we have a strong relationship with our most important ally," he said, adding that he himself had been critical of the Brexit negotiations. 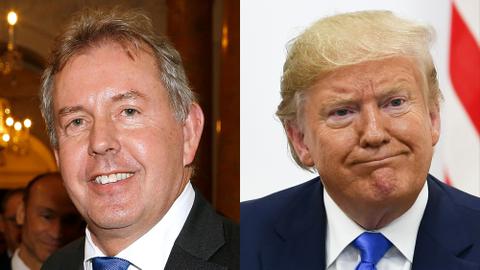 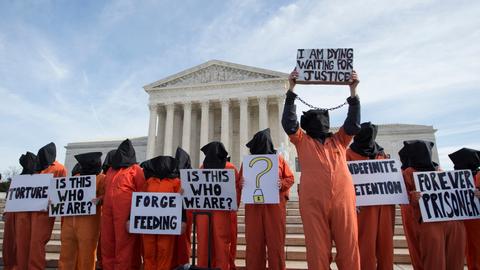