The statement from Trump comes after his Democratic rival Hillary Clinton cancelled a California campaign fundraising trip and her doctor revealed she was diagnosed with pneumonia.

Republican presidential candidate Donald Trump on Monday said he will release 'very specific' details about his health after his Democratic rival Hillary Clinton's campaign revealed she was diagnosed with pneumonia.

Trump was unusually subdued in his first public comments on Clinton's illness and added that health was a major issue in the 2016 campaign.

"I think it's an issue. In fact ... this last week I took a physical and .... when the numbers come in I'll be releasing very, very specific numbers," Trump said.

Clinton's bout of pneumonia, kept secret until she nearly collapsed on Sunday, has raised uncertainty about her health going into the final weeks of presidential campaigning. And Trump, who has previously promoted the idea that Clinton was not 'fit' enough to be president, wished his rival well.

"I just hope she gets well and gets back on the trail, and we'll be seeing her at the debate," Trump said.

The Clinton campaign finally disclosed on Sunday that the 68-year-old Democratic presidential nominee had been diagnosed with pneumonia on Friday after she complained of allergies and was seen coughing repeatedly in recent days.

Clinton's campaign cancelled a two-day trip by the former first lady to California which was scheduled to begin Monday morning.

The disclosure was made public hours after her campaign said she had become "overheated" to explain why, knees buckling and unsteady, she was rushed from a ceremony marking the September 11, 2001, attacks in New York to her daughter Chelsea's apartment.

The pneumonia incident brought up some familiar concerns about Clinton's penchant for secrecy which has fueled a debate about her use of a private email server while she was President Barack Obama's secretary of state from 2009 to 2013.

The health problem was the latest blow for Clinton at a time when Trump has erased most of her lead in national opinion polls and is competitive again in many battleground states where the November 8 election is likely to be decided.

Her dismissal of half of Trump's supporters as a "basket of deplorables" of racist, homophobic people on Friday triggered a firestorm of criticism and prompted her to roll back the comment.

The issue also put pressure on both Clinton and Trump, the Republican presidential nominee, to reassure American voters about their health.

The candidates' health comes into question given the rigors of the presidential campaign, in which the food is often unhealthy, sleep is elusive and the packed schedule and extensive travel is stressful.

Trump is expected to discuss his own health in an interview to air on Thursday with celebrity physician Dr. Mehmet Oz.

Trump, a New York businessman, has made no secret of his affinity for fast food, sometimes sharing photos of himself on his campaign jet or at Trump Tower enjoying fried chicken, hamburgers and a taco bowl.

But he has made less information available about his health than Clinton has.

Clinton released a two-page letter outlining her medical condition in July 2015 that sought to reassure Americans about her health after she fell and suffered a concussion at home in 2012 near the end of her tenure at the State Department. 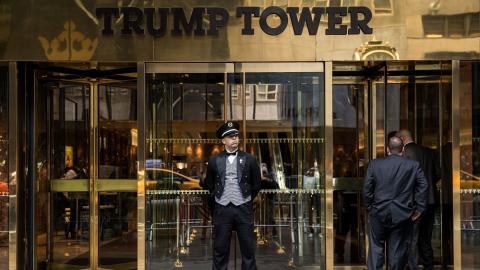