1
China assails Biden for 'smear' in annual address to US Congress
2
S Korea parliament votes to impeach minister over deadly stampede
3
Biden vows 'to protect' US, challenges Republicans on debt
4
US vows to provide aid to quake-hit Syria but not Assad
5
Peshawar suicide bomber was in police uniform: Police

It came after Pyongyang's latest launch on Friday, sending a missile over Japan for the second time in under a month.

The Blue House said Moon and Trump agreed that the two nations would work with the international community to implement the latest UN Security Council's resolution 2375, Park added.

The Council stepped up sanctions against Pyongyang earlier this month, imposing a ban on North Korea's textile exports and capping its imports of crude oil.

Taking it to the Pentagon

The US ambassador to the United Nations Nikki Haley said on Sunday that the UN Security Council has run out of options on containing North Korea's nuclear program and the United States may have to turn the matter over to the Pentagon.

"We have pretty much exhausted all the things that we can do at the Security Council at this point," Haley told CNN's State of the Union, adding that she was perfectly happy to hand the matter to Defense Secretary James Mattis.

"We're trying every other possibility that we have but there's a whole lot of military options on the table."

US-ally Kuwait has given North Korea's ambassador a month to leave the Gulf state and will downgrade its diplomatic representation with Pyongyang, a senior Kuwaiti diplomat told AFP Sunday.

North Korea's diplomatic presence in the emirate will also be reduced to a charge d'affaires and three diplomats, the source told AFP, requesting anonymity.

The source said Kuwait will not renew permits given to North Korean workers to re-enter the country after projects they are currently working on are completed "within one or two years".

There are between 2,000 and 2,500 North Korean workers in Kuwait, and thousands more are believed to be working in other Gulf states.

Kuwait has also decided to stop issuing visas to North Koreans and suspend all trade relations and flight links with Pyongyang.

Asian diplomatic sources have told AFP that South Korea and Japan have been putting pressure on Gulf states to stop employing North Korean workers because the money they sent home was benefiting the North. 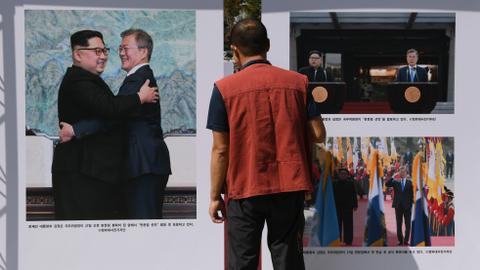 1
China assails Biden for 'smear' in annual address to US Congress
2
S Korea parliament votes to impeach minister over deadly stampede
3
Biden vows 'to protect' US, challenges Republicans on debt
4
US vows to provide aid to quake-hit Syria but not Assad
5
Peshawar suicide bomber was in police uniform: Police