President Donald Trump bolted from the agreement negotiated under his predecessor Barack Obama, under which Iran had drastically curbed its nuclear activities.

The United States said Wednesday it was ending waivers in its sanctions for nations that remain in the Iran nuclear accord, bringing the deal further to the verge of collapse.

Secretary of State Mike Pompeo said he was responding to Iran's "brinkmanship" of nuclear steps, which have been aimed at pressuring the United States to remove sanctions as called for by the 2015 accord.

"These escalatory actions are unacceptable and I cannot justify renewing the waiver," Pompeo said in a statement.

President Donald Trump bolted from the agreement negotiated under his predecessor Barack Obama, under which Iran had drastically curbed its nuclear activities.

But the Trump administration until now had issued waivers to allow companies, primarily from Russia, that are still present in Iran to carry out the agreement.

The United States will notably remove the waivers that allowed the modification of the heavy water reactor in Arak, which prevented it from using plutonium for military use, as well as the export of spent and scrap research reactor fuel.

Today, I am ending the sanctions waiver for JCPOA-related projects in Iran, effective in 60 days. Iran’s continued nuclear escalation makes clear this cooperation must end. Further attempts at nuclear extortion will only bring greater pressure on the regime.

Pompeo said that the United States was issuing a final 60-day waiver to allow companies involved in the projects to wrap up their operations.

The United States, however, did not move to stop international support for Bushehr, oil-rich Iran's only nuclear power plant, where Russia has been supplying fuel.

Pompeo said the United States was providing a 90-day waiver extension on Bushehr to "ensure safety of operations" but reserved the right to modify it at will.

In justifying the moves, Pompeo also pointed to recent comments by Iran's supreme leader, Ayatollah Ali Khamenei, who said it was an "Islamic duty" to fight for the "liberation of Palestine" and denounced supporters of Israel.

Pompeo accused Khamenei of invoking the Holocaust, saying: "The regime's vile rhetoric only strengthens the international community's resolve to counter its threats."

Britain, France and Germany — along with Russia and China — still support the nuclear accord, saying that it was working by reducing Iran's nuclear activities.

The Trump administration, which has close ties both to Israel and Iran's regional rival Saudi Arabia, called the deal a "disaster" and said the larger issue was reducing Tehran's activities in the region.

Iran's economy has faced intense pressure over the sanctions, while Trump has also used military force, killing a top Iranian general in a January drone strike. 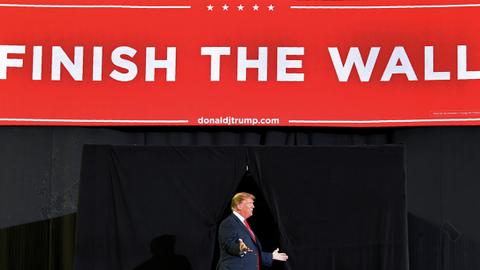 Trump has declared a ‘national emergency’. What does it mean?