Prosecutors demanded a sentence of more than 15 years after a New York jury had found former Halkbank executive Hakan Atilla guilty of helping Iran evade US sanctions, that followed a nearly four-week trial, in January this year.

A New York judge on Wednesday will announce the sentencing of a former deputy CEO of Turkey’s public bank, Hakan Atilla, three months after a jury found him guilty in the case relating to the evasion of US sanctions on Iran.

Earlier on April 4, US prosecutors had asked the federal judge hearing the case to sentence the Turkish banking executive to more than 15 years in prison.

In March 2016, authorities in the United States arrested Reza Zarrab, a businessman who has both Iranian and Turkish citizenship, for breaching US sanctions against Iran. He was the prime suspect in the case until he pleaded guilty and became a witness, putting the former deputy CEO of Halkbank at the centre of the crimes.

During his testimony, Zarrab said that he had never bribed Atilla nor had a private meeting with the executive. The statement did not carry weight in the eyes of the jury when it declared Atilla guilty.

Zarrab also said that Atilla had sought legal documents for transactions, prompting him to complain about Atilla to his then general manager of Halkbank, Suleyman Aslan.

The case caused a strain in the relations between Turkey and the US, which were already at odds over US support for the YPG in Syria and Washington's lack of response to Ankara's request to extradite Fetullah Gulen, who is the head of the Fetullah Terrorist Organisation (FETO) and has been living in the US under self-exile since the late 90s.

Turkish President Recep Tayyip Erdogan said on Monday that Atilla was "definitely innocent" and declaring him criminal was almost equivalent to declaring Turkey a criminal.

"There is a judicial procedure and the lawyers of Halkbank especially are following this judicial process. I hope it doesn’t yield a result that will completely destroy Turkish-US relations," Erdogan said.

The YPG is the Syrian extension of the PKK, which has been waging a deadly armed campaign against the Turkish state for more than 30 years and is recognised as a terrorist organisation by the US, the EU and Ankara.

Let’s remember what the US case against Atilla was about and why it is controversial:

What are the charges against Atilla?

However, Zarrab and Atilla are the only ones to have been arrested by the US authorities.

In early January, the jury found Atilla guilty on five charges related to conspiracy and bank fraud but was acquitted of money laundering.

The verdict by a panel of six men and six women against Atilla, 47, was reached after more than three weeks of testimony and four days of deliberation.

Contradictions of the case

The US case against the Iranian-Turkish businessman Reza Zarrab shifted against Hakan Atilla, after the former plead guilty and made an agreement with the New York prosecutor’s office to become a witness.

It is not uncommon for a defendant to become a witness in any particular case, but there have been some controversial aspects in the case against Atilla, that include submission of illegally obtained evidence and the targeting of civilians in a case generally pertaining to entities.

The prosecutor's office submitted voice recordings and Whatsapp messages as evidence against Atilla without citing its source.

However, the recordings were identical to those used in a December 2013 case that took place in Turkey when Turkish prosecutors and police officers with links to Gulen tried to topple the government with evidence which was either illegally obtained or fabricated.

US prosecutor later included Huseyin Korkmaz, a former Turkish police officer who took part in the December 2013 indictment, as a witness against Hakan Atilla.

Another controversial point of the case is that individuals have been targeted rather than companies they were affiliated with.

The United States has previously also acted against trade relations between companies of different foreign countries.

European banks, such as British HSBC and French BNP Paribas were also punished by pecuniary penalties after carrying out transactions with Iran, in a bid to break the embargo.

However, none of the employees were detained like Atilla was, nor were they sent to prison, which is a possibility in Atilla's case.

Another controversial aspect of the case was US judge Richard Berman who is reportedly aligned towards FETO and the former US attorney in Manhattan Preet Bharara who is known for his anti-Erdogan (Turkish President Recep Tayyip Erdogan) stance.

Former US attorney in Manhattan Preet Bharara filed the original charges in March 2016. Bharara was later removed from his position by US President Donald Trump.

Former judge Richard Berman is another controversial figure in the case whose impartiality has been questioned, after he attended a symposium organised by FETO in Istanbul in May 2014, where he criticised the Turkish government.

Turkey has repeatedly said this case is a continuation of the December 17-25, 2013 cases that were run by prosecutors related to FETO, who fled the country before any such links could be proven.

Police officers who said they were not FETO members refused to follow this order. But later it turned out that prosecutors, police chiefs and police officers who were working on the cases were actually members of FETO, according to an intelligence report recently presented to the Turkish Supreme Court of Appeals.

Turkey has accused Fetullah Gulen of leading the investigations through FETO members.

The group's members infiltrated some of the strategic government offices over the years and appointed other members to significant positions as judges, prosecutors and police officers.

The December 2013 operations were only the first move by FETO against the government. One-and-a-half years later, they tried to topple the government through a coup, with the help of high-ranking soldiers in the army. 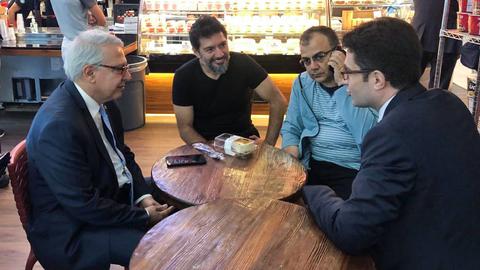