US will not carry out "mass deportations"

US Secretary of Homeland Security John Kelly says mass roundups won't be carried out, but the US government will be focusing on "criminal offenders first."

The United States will not carry out mass roundups or deportations under its tough crackdown on undocumented migrants, but it is determined to "gain control" of its southern border, the US Secretary of Homeland Security has said.

"You have to understand that we are not going out and doing mass deportation. We have laws that I must follow so we will be looking primarily at criminal offenders first," US security chief John Kelly said on Wednesday during his visit to Guatemala.

Kelly's visit to Guatemala – one of several countries in the region where undocumented migrants to the US come from – is the first by a senior US official since US President Donald Trump took power in January.

According to TRT World's Patrice Howard, who is following the story from Los Angeles, Kelly's visit to Guatemala is designed to ease tensions caused by the new immigration measures.

The Trump administration aims to reduce the size of the undocumented migrant population in the US, estimated at 11 million.

Many of them provide a vital financial lifeline to family in Central and Latin American countries.

Kelly defended the White House's measures saying, "There will be no mass round ups and when we do take someone into custody they are then put into the American legal justice system, that's the courts, and the courts will decide what will happen to them."

TRT World spoke to US immigration law expert Efe Poturoglu who said, "There is not going to be a change in the law, what we are going to see is some major changes in the enforcement priorities and it is going to include a much larger group than it was before."

Kelly is due in Mexico on Thursday, along with US Secretary of State Rex Tillerson.

Mexico is angry over Trump campaign rhetoric and post-election developments.

The new guidelines are seen as a de facto attempt to make Mexico responsible for what it sees as a US problem: undocumented migrants who are not Mexican citizens.

Trump has also angered Mexico by vowing to build a wall to keep out immigrants from Mexico and Latin America and revise trade relations.

On Wednesday, the Mexican government rejected the new US immigration regulations.

"I want to say clearly and emphatically that the Government of Mexico and the Mexican people do not have to accept provisions that one government unilaterally wants to impose on another," Mexican Foreign Affairs Minister Luis Videgaray said in the capital Mexico City.

The White House says Thursday's high-profile visit is symbolic of the US-Mexico relationship.

"It's significant that the president is sending the secretaries to Mexico so early in the administration. It's symbolic of the meaningful relationship that our two nations have," White House spokesman Sean Spicer said on Wednesday. 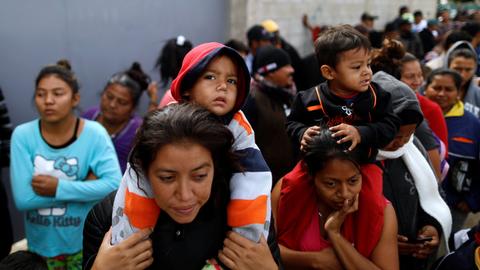 Central Americans will seek asylum at southern US border

Caravan of 1,700 migrants crosses into Guatemala, sets sight on Mexico