Relations between Washington and Tehran have deteriorated since President Donald Trump's administration last year pulled out of a 2015 nuclear deal between major powers and Iran, and began reimposing sanctions.

The United States said on Thursday it will restrict visas for Iranian officials for their roles in repressing peaceful protests and imposed sanctions on two Iranian judges as Washington ramped up its pressure on the Islamic Republic.

At least 304 people have been killed during the anti-government unrest, Amnesty International said earlier this week.

"We're restricting visas for current or former Iranian officials and individuals responsible for, or complicit in, the abuse, detention or killing of peaceful protesters or for inhibiting their rights to freedom of expression or assembly," US Secretary of State Mike Pompeo said.

Relations between Washington and Tehran have deteriorated since President Donald Trump's administration last year pulled out of a 2015 nuclear deal between major powers and Iran, and began reimposing sanctions.

Washington also announced sanctions on Thursday for two Iranian judges it accused of punishing Iranian citizens and dual nationals for exercising their freedoms of speech and assembly.

Pompeo said one of the judges, Abolghassem Salavati, sentenced U.S. citizen Xiyue Wang to 10 years in prison on spying charges. Wang was released earlier this month in a prisoner exchange after being held for three years.

"We're gladdened we won Xiyue's release, but he should have never been sentenced or jailed in the first place," Pompeo said.

In addition to Salavati, the U.S. Treasury Department imposed sanctions on Mohammad Moghisseh, a judge it said was "notorious for sentencing scores of journalists and internet users to lengthy prison terms."

The sanctions imposed by the Treasury Department freeze any U.S. assets of the two judges and generally bar Americans from dealing with them.

Foreign banks that knowingly help the men carry out significant transactions or anyone who provides certain support to them could lose access to the U.S. financial system or see their property under U.S. jurisdiction frozen.

Both judges have previously been blacklisted by the European Union, Treasury said.

"The United States will not be a bystander to ongoing oppression and injustice in Iran," Treasury Secretary Steven Mnuchin said in a statement. 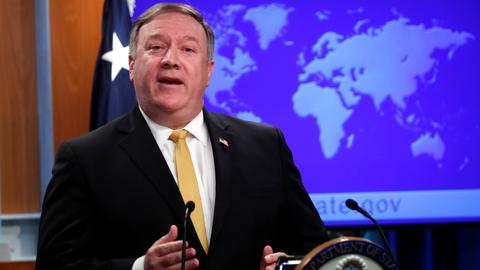 US terminates 'treaty of amity' with Iran after UN court ruling