The country's pro-government Supreme Court backed down from an unprecedented move to strip congress of its legislative powers that sparked widespread charges of "coup d'etat" in the South American country.

Unprecedented pressure from other Latin American nations and dissent within its own ranks appear to have been the catalyst for the judicial reversal.

''This controversy is over,'' Maduro said just after midnight to a specially convened state security committee that ordered the top court to reconsider.

The court duly erased the two controversial judgements during the morning, the government said, and its president, Maikel Moreno, later addressed the nation.

The court said that it was revoking a March 29 decision to take over legislative powers from the National Assembly, a move opponents had branded a "coup d'etat."

While Maduro, 54, sought to cast developments as the achievement of a statesman resolving a power conflict beneath him, his foes said it was a hypocritical row-back by an unpopular government that overplayed its hand.

Having already shot down most congressional measures since the opposition won control in 2015, the pro-Maduro Supreme Court went further on Wednesday with a ruling it was taking over the legislature's functions because it was in ''contempt'' of the law.

That galvanised Venezuela's demoralised and divided opposition coalition and brought a torrent of international condemnation from the United States, the European Union, Spain, Germany and a host of Latin American countries.

The meeting of the Foreign Ministers of #Mercosur Member States on the institutional situation in #Venezuela is being held in Buenos Aires pic.twitter.com/CdtmaEvgAu

The head of the Organization of American States, Luis Almagro, has called for the regional group's permanent council to hold crisis talks on the situation.

Foreign Ministers of the bloc said in a joint statement after a meeting in Buenos Aires that Venezuela must take measures "to ensure the effective division of powers" and "respect the electoral schedule."

Unclear how wounded is government?

Maduro's opponents are calling for next year's presidential election to be brought forward and the delayed local polls to be held, confident the ruling Socialist Party would lose.

Opposition leaders recast a planned Saturday protest as an open air meeting. Hundreds of supporters joined congress members in a wealthy Caracas neighborhood, where they celebrated the rare victory.

"It's not clear exactly how wounded the government is. This is the first time since the opposition won the National Assembly in 2015 that they have managed to get the president to reverse a decision. So this is huge," said Javier Corrales, who teaches Latin American politics at Amherst College in Massachusetts. 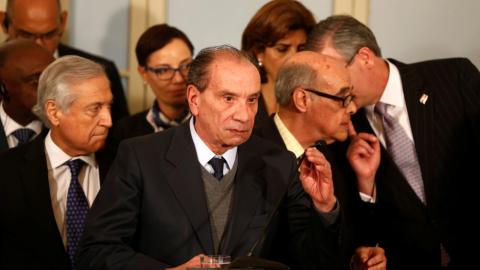