The same number of people died in the 2014 anti-Maduro protests. Meanwhile, Venezuela deploys troops in Tichara province and US official at UNSC draws parallel between the Latin American country's escalating crisis and Syria.

The death toll from Venezuela's political crisis hit 43 when a 15-year-old boy died Wednesday, prosecutors said, matching the number killed in the last comparable wave of unrest in 2014. The boy died "during a demonstration" in the riot-hit western state of Tachira, the public prosecution service said on Twitter – a dark milestone in a worsening crisis as protesters demand elections to remove President Nicolas Maduro.
Venezuela's government said on Wednesday it was sending troops to Tachira. Looting and arson attacks had erupted overnight, authorities said.
"I have ordered the transfer of 2,000 guards and 600 special operations troops" to Tachira, Defence Minister Vladimir Padrino Lopez said.
On Tuesday, the state prosecutor confirmed at least two men were killed in separate demonstrations in the same state: Luis Alviarez, 18, and Diego Hernandez, 33. Their deaths prompted more protests.
Authorities said that in Tachira some 20 shops, restaurants and a school were looted, two police stations set on fire and a military outpost attacked with firebombs over the previous night.
Fernanda Carvalho, 53, said that virtually all the food was stolen from her bakery in San Cristobal.It felt like my world was falling in. There go years of work and investment — Fernanda Carvalho, a San Cristobal resident

In Caracas, opposition groups held a candlelight vigil. Thousands of protesters have been trying out non-violent protest strategies over the past week

Excrement cocktails were followed by a nationwide sit-in to block major thoroughfares.

US, Venezuela spar at UN

The United States warned at the United Nations that Venezuela's crisis was worsening and could escalate into a civil conflict like that of Syria.

"We've been down this road – with Syria, with North Korea, with South Sudan, with Burundi, with Burma," she told reporters. "The international community needs to say 'respect the human rights of your people' or this is going to go in the direction we've seen so many others go."

She earlier warned that Venezuela was "on the verge of humanitarian crisis."

Venezuela's Foreign Minister Delcy Rodriguez, however, said on Twitter that the United States was out to topple the Venezuelan government.

"The United States has shed light on the plan it is leading to intervene in Venezuela," she said. "Other countries (at UN headquarters) put it loudly and clearly: Venezuela is no matter for the UN to address."

While the UNSC met, Maduro supporters gathered outside the presidential palace in Caracas. However, Maduro remained a no-show.

Venezuelans living abroad, many of whom fled the country's economic chaos, have in recent weeks accosted visiting state officials and their family members. Maduro on Tuesday likened that harassment to the treatment of Jews under the Nazis.

We are the new Jews of the 21st century that Hitler pursued. We don't carry the yellow star of David ... we carry red hearts that are filled with the desire to fight for human dignity. And we are going to defeat them, these 21st century Nazis — President Nicolas Maduro

Maduro, 54, who narrowly won the election in 2013 after Chavez's death, says he is the victim of an international right-wing conspiracy that has already brought down leftist governments in Brazil, Argentina and Peru in recent years.

However, the protests which have been taking place in the since April have been against Maduro's handling of an economic and political crisis.

Protesters are demanding early elections and accuse Maduro of trying to cling to power.

Elected in 2013, Maduro has accused the opposition of plotting a coup against him with US backing. 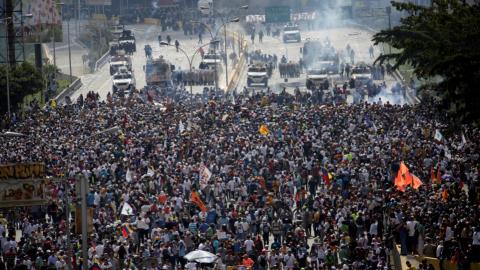 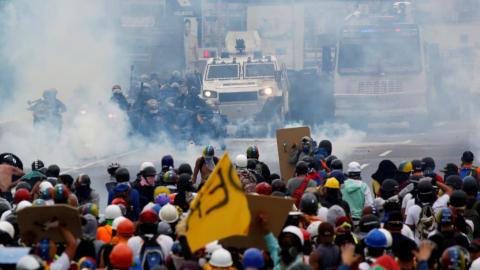