The two sides failed to come to terms in a prior round of talks last December, when they concluded by saying they had made progress but needed more time. In the new round, they are seeking to reach an agreement to ease economic and political crisis.

Members of Venezuela's leftist government and opposition leaders resumed talks in the Dominican Republic on Friday, seeking to reach an agreement to ease a deep political and economic crisis in the OPEC country.

The two sides failed to come to terms in a prior round of talks last December, when they concluded by saying they had made progress but needed more time. Expectations among Venezuelans for a deal this time around are low.

Opposition coalition Democratic Unity "is attending the meeting in good faith, to seek a way of allowing Venezuelans to build a route to the future," tweeted party lawmaker Luis Florido on Thursday.

The opposition leaders are demanding that Venezuelan President Nicolas Maduro accept humanitarian assistance from abroad to ease a crisis that has led to shortages of food and basic goods for millions of people.

They are also calling for the release of several hundred jailed political activists.

Government representatives want the opposition to push for the elimination of sanctions levied last year by US President Donald Trump's administration, which have added to economic woes and complicated a debt restructure.

Dominican President Danilo Medina is leading the negotiations, which also include representatives from Bolivia, Chile, Mexico and Nicaragua.

Some of the participating countries have threatened to withdraw if agreements are not reached in this round.

"If there are no concrete and credible results, then there will be no point in moving forward," Chilean Foreign Minister Heraldo Munoz wrote on his Twitter account on Thursday.

Mexico's foreign ministry said in a statement on Friday that it was also "evaluating" its participation.

Four people were killed and 15 injured on Thursday in violence linked to food looting in Venezuela, according to members of the opposition and the local press.

It brought to six the number of deaths tied to desperate food shortages in the oil-rich but crisis-riven country since December.

In the town of Arapuey in the west of Venezuela, for several days now looters have targeted shops and stores and clashed with soldiers, said Carlos Paparoni, an opposition lawmaker. He said around 100 people have been arrested.

Gaby Arellano, another opposition lawmaker, said the area has been "overtaken" by soldiers and police, with shop owners doing what they can to defend their property.

Venezuela is in the throes of a deepening crisis caused by falling oil prices, spiraling inflation, and corruption that has decimated the economy.

In the past several days looting and attempted looting has broken out in a number of towns and cities.

A 19-year-old Venezuelan was shot dead on Wednesday when hundreds of people looted trucks carrying flour and chicken in the western city of Guanare.

On December 31, a young woman, also aged 19, died after being shot in the head, allegedly by a soldier, while waiting in Caracas to buy pork distributed by the government.

Hyperinflation is expected to top 2,300 percent this year in Venezuela.

Local universities say 30.2 percent of Venezuelans face poverty and 51.5 percent extreme poverty while the government puts the figures at 18.3 percent and 4.4 percent, respectively. 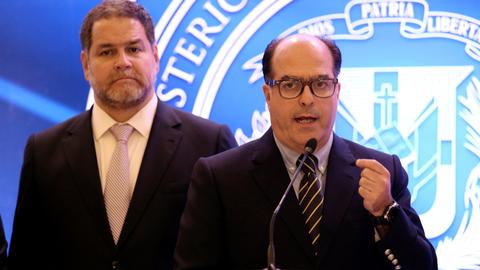