Venezuelan state agencies have run up close to $1 billion in debts with shipping firms due to delays in returning containers, potentially boosting the cost of importing staple goods as the country struggles with product shortages and an economic crisis.

The agencies have held containers for months or simply never returned them, at times leaving the truck-sized steel boxes for years in oil industry facilities or on provincial farms even though this costs $100 per day per container, according to industry sources.

The debts have piled up over the last six years, coinciding with a steady rise in the role of state agencies in importing goods to Venezuela, particularly food. The country is served by industry giants such as Maersk of Denmark and Hamburg Sud of Germany.

The container debts put shipping lines on a long list of industries ranging from international airlines to telecommunications giants that have complained of being unable to collect on billions of dollars in unpaid Venezuelan bills.

Like these groups, it is unclear if shipping firms will ever be able to recover the debt. But it adds to the risks for shipping companies serving the Venezuelan market. Freight rates to Venezuela have risen to become among the highest in region, and in some cases are three times higher than other South American destinations, according to documents seen by Reuters.

That higher cost creates an additional difficulty for President Nicolas Maduro's government, which is struggling with triple-digit inflation and chronic product shortages reminiscent of the former Soviet Union.

Government agencies including the Food Ministry and state oil company PDVSA, which is involved in food imports, did not respond to requests for comment.

Venezuela's shipping industry association last year estimated the debt at $817 million for containers that were not returned or returned late. The figure has now topped $1 billion, according to an industry source with first-hand knowledge of situation who asked not to be identified.

In the country's main port city of Puerto Cabello, containers worth $20,000 to $40,000 each are piled up in empty lots and along unpaved roads.

"Puerto Cabello is turning into one big warehouse," said opposition deputy Deyalitza Aray, who has investigated what she calls the growing disorder in public imports.

A container bearing Hamburg Sud's logo, for example, sits behind a trailer at a fertilizer plant owned by state oil company PDVSA outside Puerto Cabello. Its function is not immediately evident.

A Venezuelan shipping industry source said he travelled to a farm in the central state of Portuguesa in hopes of recovering 12 containers and ended up finding more than 100.

Hamburg Sud declined to comment. A Maersk official acknowledged in an interview that "payment issues have certainly become more challenging" in Venezuela, but did not directly comment on shipping container debts.

The debts are the result of unpaid fines from containers that spent months or years in Venezuela, according to local port sources. At this point, most have been returned.

"The government still doesn't want to recognise this debt," the shipping industry source said, adding that debts are unrelated to payment for shipping services.

Shipping lines plan to continue working in Venezuela despite its difficult financial situation, which includes nearly $7 billion in bond payments to be made by Venezuela and PDVSA for the remainder of the year. Investors worry about a potential default, despite Venezuela's assurances to the contrary.

Shipping lines prefer to avoid conflict with the government and hope things will improve in the medium term, according to industry sources.

Maduro and his allies say the country's economic problems are the result of an "economic war" waged by political adversaries, and say the government's import efforts have helped provide goods and services to the country's poor.

Socialist Party legislator Ramon Lobo of the legislature's finance commission said he was not aware of debts to shipping firms, but that the government was seeking to improve port logistics.

"There has been a process of increasing the flexibility of administrative procedures that slowed imports and exports," he said.

The recent plunge in the price of oil, which provides nearly all of Venezuela's foreign exchange, has left it struggling to import food and the raw materials to manufacture staple goods.

Maduro's government has used currency controls created by late President Hugo Chavez to channel dollars for food imports toward state-run firms, which now manage more than half the country's total imports even though they have for years been synonymous with mismanagement.

Port authorities left containers for as long as six years in Puerto Cabello, the comptroller said in 2014.

"We've turned into hunters of containers with spoiled merchandise," said Aray, the legislator, whose desk is filled with pictures of packages of powdered milk that expired while sitting in shipping containers.

Shipping lines over the last year have increased rates for delivery to Venezuela to compensate for the associated risks, which include risk of theft or assault, difficulty in obtaining payment for merchandise, and long queues at ports.

This is in contrast to global freight rates, which are falling in response to lower fuel prices and weaker international trade.

"But the reality is this merely reflects the economic woes in the wider Venezuelan economy, which is effectively in meltdown." 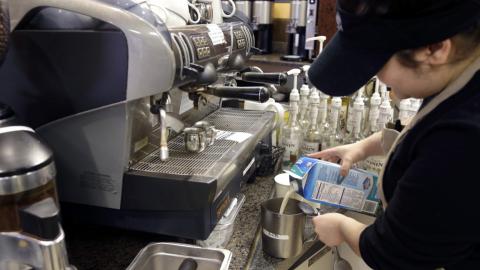 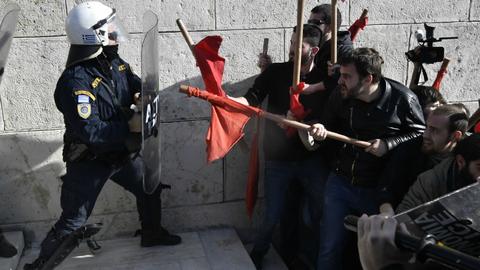 Thousands of Greeks protest over right to strike 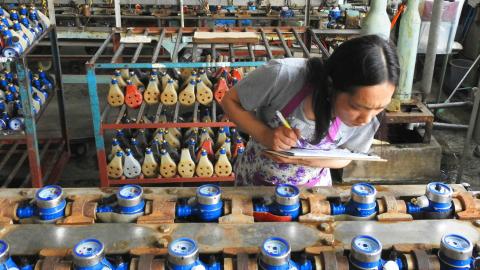