The White House has denied The New York Times story which cites a note written by the sacked FBI director outlining how US President Trump had asked him to shut down an investigation into ousted national security adviser Michael Flynn.

The New York Times reported on Tuesday that US President Donald Trump asked then-FBI Director James Comey to shut down an investigation into ousted national security adviser Michael Flynn and his ties with Russia.

Trump made the request during an Oval Office meeting in February, the Times cited a memo Comey wrote shortly after the conversation. A person who had seen the memo but was not authorised to discuss it by name also corroborated the Times story to The Associated Press on Tuesday.

The Times said that Trump told Comey, "I hope you can let this go."

According to the Times, Comey wrote in the February memo that Trump told him Flynn had done nothing wrong. But Comey did not say anything to Trump about limiting the investigation, replying, "I agree he is a good guy."

Flynn resigned the day before the February 14 meeting, after it was revealed he had lied to White House officials about the nature of his contacts with Russia's ambassador.

I have been asking Director Comey & others, from the beginning of my administration, to find the LEAKERS in the intelligence community.....

On Monday, current and former US officials told The Washington Post, The New York Times and Buzzfeed that Trump had leaked highly classified terror intel with Russian Foreign Minister Lavrov and Ambassador Sergey Kislyak. It was contact with Kislyak as early as December 2016 which landed Flynn in trouble.

The intel which Trump had let slip to the Russians was not for the US to share as the source, a US partner, had not authorised the White House to pass the information.

In doing so, US media pointed out, Trump possibly compromised a key source and damaged the country's information-sharing relationships which are key in maintaining global security.

Tuesday's news has only served to make things worse for a besieged White House being closely examined for its ties to Russia.

The Times said it was part of a paper trail Comey created documenting what he saw as Trump's efforts to improperly interfere in the ongoing probe. Memos by FBI officials have previously helped corroborate details of improprieties by people in power.

Trump abruptly fired Comey last week, saying he did so based on his very public handling of the Hillary Clinton email probe.

But the White House has provided differing accounts of the firing. And lawmakers have alleged that the sudden ouster was an attempt to stifle the bureau's investigation into Trump associates' ties to Russia's alleged meddling in the 2016 presidential election. 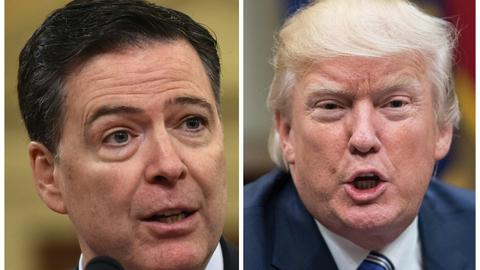