Egypt has Khokha, India has Chamki and now Afghanistan is getting its first homegrown "Sesame Street" Muppet - a six-year-old girl called Zari.

Zari, a curious and lively girl whose name means "shimmering" in the Dari and Pashto languages, makes her debut on Thursday on the "Baghch-e-Simsim" Afghan local co-production of the long-running US educational TV show for pre-schoolers.

For a small girl, Zari has a big mission.

She's there to promote female empowerment in a nation where women and children were almost completely excluded from educational opportunities some 15 years ago, according to a 2014 United States Agency for International Development (USAID) report. Afghanistan now has about five million kids under the age of five, but about one-third of them are not in school.

Zari will be featured in "Sesame Street" segments about health, exercise and well-being, and will interview a doctor and other professionals to find out what she would need to do to become one herself.

"The exciting part about Zari is that she is modeling for young girls that it is wonderful to go to school and that it's ok to dream about having a career," Sherrie Westin, Sesame Workshop's executive vice president of global impact and philanthropy, told Reuters.

"It's so powerful that the first Afghan Muppet is a girl," Westin added.

With her purple face and tangle of brown, blue and orange wool hair, Zari will wear clothes ranging from casual to traditional, and will be veiled where appropriate, said officials from Sesame Workshop, the nonprofit behind "Sesame Street."

She joins "Baghch-e-Simsin" at the beginning of its fifth season. The show, which receives funding from the US Department of State, is the most watched TV program among young children in Afghanistan, where 81 percent of children aged three to seven have seen it, according to Sesame Workshop.

Research has shown that previous seasons of the show have begun to open the minds of Afghan fathers about the value of educating their daughters, Westin said.

Sesame Workshop partnered with the Afghan Education Ministry in the hope of reducing any cultural resistance to Zari and the ideas she will help to introduce.

Zari follows female Muppets like Chamki in India and Kami in South Africa who play a key role in "Sesame Street" co-productions around the world where favorite characters like Elmo and Big Bird appear alongside locally-produced content.

Westin said TV shows like "Sesame Street," which launched in the United States in 1969, can open minds and influence attitudes in a non-threatening way.

"Part of the power of the broadcast and Zari's potential as a role model is to reach children and parents where they may not have access to other educational content," she said. 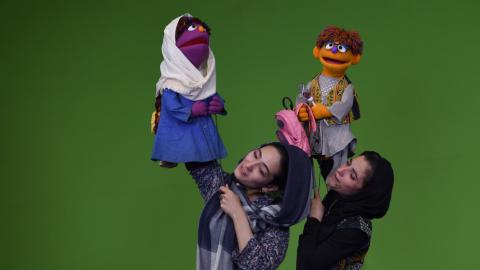