Can India save its investments in Taliban-led Afghanistan?

Since Pakistan wields influence over the Taliban, its rival New Delhi is facing a herculean task in securing its investments in Afghanistan.

India has invested in Afghanistan to the tune of more than three billion dollars in the hope that the US-backed Kabul government will be aligned with New Delhi’s interests as opposed to its archrival Pakistan.

India has made a significant effort to rebuild war-torn Afghanistan’s infrastructure from developing hydropower projects like the Salma dam located in the country’s historic city Herat to building the new Afghan parliament in Kabul in 2015.

But now with the Taliban’s swift takeover of Afghanistan following the US withdrawal, many decision-makers in New Delhi seem to be scratching their heads over the future of their investments in Afghanistan, which is now fully under the Taliban's control.

“India has been one of the biggest donors to Afghanistan and has helped the country in a variety of ways including financial aid, building much-needed infrastructure projects such as roads and dams, and providing Afghan students thousands of scholarships,” says Dr Dawood Azami, an expert on South Asia at the International Institute for Strategic Studies.

“However, there is a risk that all this might be derailed,” Azami, who's also an academic and journalist, tells TRT World, referring to the Taliban rule in Afghanistan and how it's being perceived by the current Indian dispensation.

Most of India's foreign policy experts as well as the country's political establishment view the Taliban as a proxy of Pakistan, which poses a major difficulty for the Narendra Modi government to find a middle ground and establish some degree of liaison with the militant group.

A working paper prepared last year by the American think-tank Carnegie Endowment’s India branch pointed out that “for Indian officials, there was little or no merit in engaging directly with the Taliban because of their close ties to the ISI [Pakistani intelligence community]”.

A top Indian official recently confirmed that approach. “It’s the same Taliban that was there 20 years ago,” said India’s Chief of Defense Staff Bipin Rawat last week, during a meeting on US-India connections.

Engaging with the Taliban

But Azami thinks differently. India's perception of the Taliban might change in light of fast-changing circumstances in Afghanistan, he said, adding that New Delhi could revisit its position vis-a-vis the Taliban since the armed group is now ruling a country that connects South Asia with Central Asia.

“Given the past tension between the two sides, it won’t be easy for India to deal with the Taliban regime. But the more India engages the Taliban, the more chance it could have to influence them,” says Azami, who was present during the Taliban talks in Doha in February 2020.

Azami believes that the Taliban want to have good relations with the outside world, especially regional countries, including India. “They hope political and economic relations will bring foreign investment and increase regional trade via Afghanistan bringing their newly formed government the much needed cash in revenues,” he says.

The Carnegie India report also urged the Indian government to engage with the Taliban.

“Directly speaking with those in the Taliban who are able and willing to listen would allow India the advantage of making the best of the political implosions that are likely to occur in the future,” wrote Rudra Chaudhuri and Shreyas Shende, the authors of the report, which was released last year.

Despite several requests, Chaudhuri was not available to talk to TRT World.

The report also indicated that India “reached out to the Taliban” in recent years, quoting Avinash Paliwal, an expert on India and Afghanistan.

“Economic, political and cultural relations between India and the Taliban-led Afghanistan would be mutually beneficial. Taliban have already expressed their desire to have ‘trade, cultural and economic relations’ with India,” Azami notes. Azami was also one of the contributors to the Carnegie report.

While many Indian politicians have some grave concerns about the Taliban rule, Azami draws attention to some trade facts and expectations of Afghan people, who “need India to complete the ongoing infrastructure projects, including water dams, funded by Delhi.”

India is one of Afghanistans’ biggest trade partners. Most of the Afghan dry fruits and other agricultural products are exported to India bringing hundreds of millions of dollars annually to Afghan farmers, according to Azami.

While India is a Hindu-majority country and led by a Hindu nationalist Bharatiya Janata Party (BJP), it also has a sizeable Muslim population, which has survived several communal riots and also navigated the BJP's populist rhetoric that exposes them to far-right violence on the streets.

If one goes by Douglas London's recent assertion — that India should worry about the Taliban's takeover of Afghanistan — New Delhi has to do a course correction not only on its foreign policy front but also within its own borders. London was the CIA's former chief for counterterrorism in South and Southwest Asia.

London told Hindustan Times that it's crucial for India, Pakistan and other regional powers to resolve their bi-lateral issues and join forces to "impede forces that could lead to greater turbulence and instability across the region."

"I'm just worried the timing is not right because the Indian government has not extended a hand to the Muslim community inside of India, and is therefore probably not in a real great position to start looking at compromise with the Pakistanis or the Chinese," London said.

India has another major challenge in the form of managing the Kashmir conflict on its northern border. Although the Taliban initially said it will not interfere in the conflict, one of its spokespersons recently sent a mixed signal saying the group will "raise voice for Kashmiri Muslims".

All these circumstances make it hard for India to accept the Taliban as a force that has strong ties with Islamabad.

New Delhi wants to ensure that “the territory of Afghanistan is not used against India,” Azami says. And India's main focus will be that “militants are not allowed to establish safe havens” across Afghanistan, Azami adds.

India, which witnessed Mumbai terrorist attacks in 2008, has vastly invested not only in infrastructure projects of Afghanistan but also in the country’s intelligence apparatus due to its security concerns, according to the Carnegie India report.

“India, according to a former senior U.S. NSC [National Security Council] staffer, ‘has very deep ties to the NDS’,” which is the abbreviation of National Directorate of Security, the intelligence apparatus of Afghanistan, said the report.

But in the light of the Taliban rule, which will probably dismantle the whole Afghan security structure, it’s quite doubtful that Indian investments in Afghanistan's security apparatus will survive even in the short term.

“It's not just about Indian investments in Afghanistan, the Taliban takeover has increased threats against India directly.” says Ioannis Koskinas, a former US military officer stationed in Afghanistan in the past. Koskinas is now a senior fellow at the international security program of New America, a US think-tank.

“First is the possibility that the Taliban victory can bring about both a psychological and operational boost to the Kashmiri fight directly,” Koskinas tells TRT World.

The American political analyst believes that the Taliban victory can benefit Pakistan’s Kashmir campaign in “both from a psychological perspective that Rawalpindi's support for the Taliban insurgency brought about a strategic victory, and from the operational support that Pakistan can now mass-produce militants for a more substantive resistance fight in Kashmir.”

“Also, [Indians] need to think about Al Qaeda in the Indian Subcontinent. They have congratulated the Taliban on their victory. AQIS fighters or ideologically aligned groups are already fighting for the Taliban,” Koskinas adds.

Besides addressing its security concerns, India also has other interests in Afghanistan, according to Azami.

On the economic front, New Delhi needs to implement “its developmental and infrastructure projects resulting in the winning of more Afghan hearts and minds,” the analyst says.

India also aims to improve “regional connectivity” through trade, energy and investment for which Afghanistan plays a crucial role, being located in a strategic area linking South Asia with Central Asia, Azami notes. “India also wants regional allies, as part of its economic development as well as its competition for more influence with China.”

Competing with China in Afghanistan might be a little difficult task for India. While Indian establishment figures continue to argue on the merits of reaching out to the Taliban, China has already established strong connections with the group and even hosted peace talks, ensuring its economic presence across Afghanistan.

Many analysts think that China will be a far more influential country on Taliban’s politics than any other nation.

Despite various differences, another Indian interest is related to cultural links, Azami says.

“Historically, India has been a close ally and partner of Afghanistan. India wants to keep those bilateral and civilizational links alive,” he says. 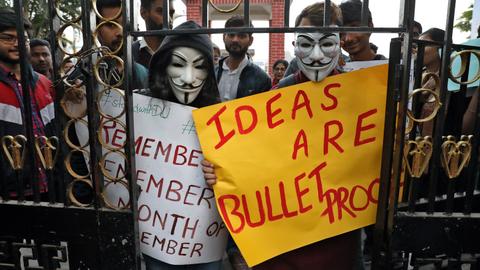