Afghan forces fight back against Taliban in northern city

The continued fight for Kunduz, in the north, comes as the Taliban simultaneously try to overtake Khanshin district in the southern province of Helmand.

Afghan National Security Forces have repelled Taliban fighters from the centre of the northern city of Kunduz, nearly 24 hours after the group almost took control of it.

The Taliban offensive in Kunduz, which began on Sunday night, has raised concerns over the resurgence of the armed group. They also made a play for Khanshin district in the southern province of Helmand. This chain of events has once again led to serious questions about the ability of Afghan forces to defend the country against the armed opposition.

Fighting for Khanshin began Monday evening, just as Afghan forces were starting to push the Taliban out of Kunduz's city centre.

By late morning Tuesday, Afghan forces had pushed the fighters from the centre of Kunduz. The position would have given the group access to several key governmental and security positions, but fighting is ongoing in several areas of the city.

The Ministry of Defense confirmed that more than 100 special forces and commandos have been deployed to the city. The ministry also stated that soldiers have begun house-by-house searches to clear out any remaining Taliban forces that may be seeking shelter in residential areas.

Waziri also said no military checkpoints had been abandoned by Afghan forces. During previous Taliban offensives in the southern provinces of Helmand and Uruzgan, police and soldiers were accused of turning over checkpoints to the armed group.

"There is good coordination between Afghan security forces … [They] are trying to maintain [the] security of Kunduz," Omarkhail told local media.

Saying the Taliban "failed" in their bid to gain control of the city, Omarkhail reassured the people that the situation in the city was returning to normal.

The US-backed international coalition said they have "multiple assets and enablers" that can be dispatched to aid Afghan forces as they continue to try and push the Taliban back.

The US backing comes despite assurances from Washington that the fighting does not present a serious threat to the stability of Kunduz. Speaking to reporters on Monday, Pentagon spokesperson Captain Jeff Davis likened the Taliban's efforts in Kunduz to "Western movie style shoot-them-up" raid than a military offensive.

The level of US support to threats against Afghan security has been seen as a real test of the strength of the nation's security forces, who are largely funded by Washington. Since 2014, the US has greatly reduced the number of their forces in the nation as their mandate changed to training and supporting the 352,000 Afghan police and soldiers.

Conflicting reports about the Taliban's control of the district have surfaced in the hours since, but Afghan officials maintain that the district remains under their control.

If Khanshin falls to the Taliban, it would be the second district in the province to fall in as many days. It will also be the third time in a month that the districts of Helmand, where US and UK forces were stationed in the past, have come under serious threat. 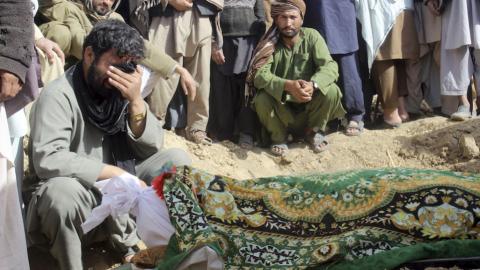