Abdul Karim Khadam, the governor of northern Samangan province, was sacked along with four other provincial governors last week.

A governor in northern Afghanistan has become the second in the region to defy an order by President Ashraf Ghani to step down, deepening a political crisis facing the government in Kabul.

Abdul Karim Khadam, the governor of northern Samangan province, was sacked along with four other provincial governors last week.

But he followed Atta Mohammad Noor, the heavyweight governor of neighbouring Balkh province, who refused to leave office after he was also sacked in December.

Noor's refusal to step down has turned the so-called "King of the North" into one of Afghanistan's most infamous politicians and a potential contender in presidential elections due in 2019, while underscoring the weakness of Ghani's government.

Khadam's decision to follow suit has deepened the crisis and threatened to further ethnic divisions between Tajiks and the Pashtun-dominated south, which often dominate Afghanistan's politics.

An ethnic Turkmen, Khadam belongs to the Tajik-dominated Jamiat e Islami party, of which Noor is also a member.

"The decision is unfair and unjust. It is against the principles. I condemn this decision and don't accept it. I will wait for Jamiat party stance about this," he told reporters late on Sunday.

Jamiat in a statement on Monday said his removal was "unjustified and yet another step toward increasing tension in the country."

The dispute comes at a bad time for Ghani's US-backed government, which is facing growing public fury over recent deadly attacks in Kabul and elsewhere in the war-torn country that have laid bare its inability to protect civilians.

Ghani, who belongs to the country's largest Pashtun ethnic group, took the presidency in 2014 in a US-brokered power-sharing deal with his rival, Jamiat-backed Abdullah Abdullah, who was named chief executive.

Jamiat has accused Ghani of failing to fulfil the terms of the agreement and has submitted demands to the president's negotiators, including a restructuring of parliament.

Noor has used the ongoing crisis to show off his strength, holding televised rallies and meeting representatives of various ethnic groups and political parties from across the country.

But as the talks drag on there are growing fears the crisis could turn violent, sparking calls from the White House and others for a peaceful resolution.

Last week, Noor asked his supporters to protest around the country, including in the capital Kabul, at end of this month if negotiations with the government failed. 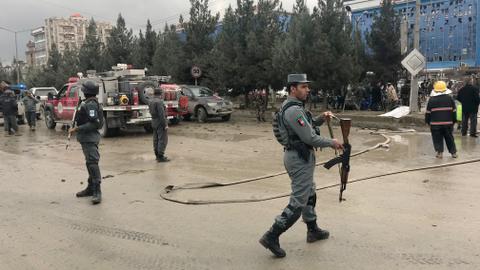