Those who attended the peaceful protest targeted in Kabul a day prior ask how three suicide bombers were able to wreak havoc in an area cordoned off 'for safety' by containers.

Timor Sharan had just returned to Kabul's Deh Mazang Square — the site of Saturday's fatal bombing — with friends who were still holding bags of food and water for the protesters, when the first blast ripped through the crowded area.

Sharan, a senior analyst at the International Crisis Group, was at the square to observe the thousands of people — mostly from the Hazara ethnic minority — who had come out to demand a 500 kV power line, linking power from Turkmenistan to Afghanistan, be routed through the central province of Bamiyan.

For hours, thousands of men, women and children — with Afghan flags in their hands — carried out their peaceful demonstration in Kabul's dry summer heat.

By the time Sharan returned with his friends, many protesters were in the process of setting up tents along one of the Afghan capital's most-crowded roundabouts. The food distribution hadn't even begun when a loud boom echoed through the heavily-congested area.

Startled and afraid, his friends barely escaped with their lives before the second blast came.

When they had returned to the scene — a site which had only moments ago served as a symbol of pride and democracy — they were shocked by the horrors they found themselves face-to-face with.

The determination of the protesters who had previously been chanting for justice and rights had given way to desperate cries for loved ones.

A mass movement of thousands of people was replaced with ambulances rushing to the scene. People helping one another move along a steady, organised march were now helping transport the dead and wounded to nearby hospitals. Bodies of once energetic young men and women now lying bloody and bruised on the ground.

In all, 80 people were killed. A further 230 were injured. The United Nations Assistance Mission in Afghanistan dubbed it as the deadliest incident in the nation since 2001.

On Sunday, a day later, those in attendance at the protest were still trying to piece together what happened.

Qudratullah Rajavi, 23, was one of thousands of protesters gathered at the West Kabul square on Saturday. Prior to the bombing, Rajavi said there was little reason for the protesters to feel in danger.

"The police were there, their job is to provide security for the people."

However, after the bombing Rajavi said it became clear the protesters were not the priority on that day.

"They provided security for the government, not the civilians," said Rajavi.

He was referring to the stacks of multi-coloured containers that had been stationed around key areas of the city.

The government's tactic of placing containers throughout the city was a repeat of the actions taken ahead of another protest regarding the power line in May. As with the May gathering, the containers were meant to once again keep protesters from reaching the presidential palace.

The initial decision to place the containers around the city was said to be a response to a protest in November 2015 that also saw thousands in attendance.

At one point during the November demonstration, a group of protesters breached administrative buildings near the palace grounds. Workers inside the offices said protesters had broken windows inside the premises.

Sharan says there is no proof that the presence of the containers led to the violence or affected the number of casualties, but they did hinder those trying to transport people to hospitals.

9 dead in #Munich horrific. But 80 dead in #Kabul. Maybe #EiffelTower should be in #Afghanistan colors not German pic.twitter.com/ROgHdYHL9e

The high casualty count meant nearby hospitals quickly filled to capacity. Victims had to be rushed from one facility to another, however, with many of the main roads blocked with containers, the transportation of the wounded was greatly hindered.

"We have to ask why the containers were there in the first place," said Sharan.

Protesters speaking to TRT World, who did not wish to be identified for fear of retaliation, said the premium the government placed on protecting the palace grounds did not help in terms of a growing trust deficit between the thousands who partook in the demonstration and the government.

They, the government, will have to find a way "to prove themselves worthy of our trust" expressed the protesters.

For Rajavi, police actions in the moments leading up to and after the explosions, also call the duty the officers felt towards the people, as opposed to the government, in question.

"The majority of the police force had already left before the blast; afterwards, many fled the scene," Rajavi said.

Though protesters expressed little sense of a looming threat prior to the blasts, security officials said they had shared their concerns about the security situation with the organisers of the protest.

Speaking to TRT World, Sediq Sediqqi, the spokesperson for the Ministry of Interior Affairs, said on the eve of the protest, the Kabul Garrison Chief held a press conference to address both the security measures that would be taken and the threats against the gathering.

A security official speaking on condition of anonymity as he was not authorised to speak to the media, said the security services had received word of imminent, violent threats against the demonstration, which they had shared with organisers.

Government representatives also said security forces were able to gun down one of the three attackers.

Our hearts are with Kabul, where a suicide attack killed 61 and wounded at least 200 #Kabul #Afghanistan pic.twitter.com/u4dEGv8fyb

Haroon Chakhansuri, a spokesman for the presidential palace, told the Associated Press the threats of violence against the demonstration were likely intended to "bring sectarianism to our community."

The last time the nation's Shiite population were the target of a major attack was in 2011, when a bombing at a procession to mark the occasion of Ashura led to at least 60 deaths. Lashkar-e-Jhangvi, an outlawed group based in Pakistan, claimed responsibility for that attack.

In their statement of responsibility, a group claiming allegiance to DAESH specifically mentioned the majority of those in attendance at the protest were of the Shia sect. Roughly 20 per cent of Afghans belong to the Shia branch of Islam. Of those, the majority are of Hazara ethnicity.

According to the ICG analyst, if DAESH-aligned forces were truly behind the blasts, there was little doubt that the sect of the majority of the attendees was what motivated Saturday's bloody attack.

Unlike neighbouring Pakistan, Afghanistan has yet to face an active armed resistance to the presence of non-Sunni sects in the nation.

If the attack truly was the work of a DAESH-affiliated group, it would mark the first time fighters claiming ties to the Iraq and Syria-based group claimed responsibility for an attack in the Afghan capital.

Previously, the government claimed DAESH-aligned forces were "on the run." However, in recent months, MPs from the Eastern provinces of Nangarhar and Kunar had warned that forces claiming allegiance to DAESH were expanding into new territories across the east and parts of the north.

In the wake of the attack, the Kabul government has tried in earnest to reiterate their commitment to the people. In a Saturday evening address to the nation, Ashraf Ghani, the Afghan president, promised swift justice against the perpetrators.

"By attacking civil liberties, our enemies think that they can divide us. But they will fail."

After announcing an investigation headed by the attorney general, Ghani declared Sunday a day of national mourning. Residents in the city described a sombre mood overtaking the capital on Sunday as the families of the 80 victims prepared to bury their loved ones in the Dasht-e Barchi neighbourhood of Kabul.

Prayers for the martyrs of yesterday's terrorist attack in #Kabul at the Khatm-e-Quran ceremony held today in ARG. pic.twitter.com/eCnDpSH2aF

Ghani, with two of the nation's top Hazara leaders at his side, held funeral prayers for the deceased.

The president also announced Deh Mazang roundabout, where hundreds of lives were forever changed by twin bomb blasts, would now be dubbed "Martyrs Square, so that our generations remember how much it cost citizens to achieve democracy." 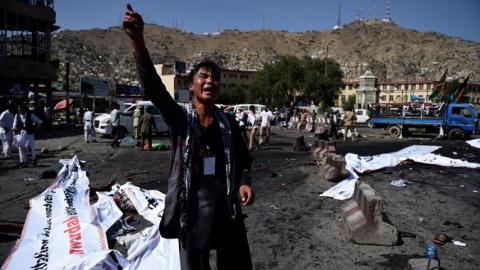