Britain warned there would be "consequences" if China breached commitments it made about rights in Hong Kong when the United Kingdom handed over control, threatening to maintain pressure on Beijing over the treatment of pro-democracy protesters.

A Hong Kong pro-democracy lawmaker expressed fears Thursday that the situation could worsen after police announced the arrests of more than a dozen people following protests earlier this week.

Legislative Council member Claudia Mo called on people to understand the frustration and anger of the mostly youthful protesters, even if they have technically broken the law.

"I am terribly worried that a massive kind of round-up of protesters could trigger very negative sentiment on the part of the young," she told reporters. "Things could get worse."

Police have announced the arrest of 12 people who tried to disrupt a ceremony Monday marking the anniversary of Hong Kong's return from Britain to China in 1997.

Another person was arrested for his alleged involvement in the storming of the legislature building that night.

The city's legislature will not be able to meet for three months because of the extensive damage by the protesters, pro-democracy lawmaker Helena Wong said.

She said the fire prevention and electronic voting systems need to be repaired and restored. She also said that computer hard discs had been taken from the security control room, with the names, photos and titles of those who had building access.

More arrests seem likely, given the extent of the damage.

Eleven men and a woman were arrested over the Monday morning protest. They face various charges including possession of offensive weapons, unlawful assembly, assaulting a police officer, obstructing a police officer and failing to carry an identity document. The brief statement did not provide further details.

British Foreign Secretary Jeremy Hunt vowed on Thursday to maintain pressure on China over the treatment of protesters in Hong Kong, amid an escalating diplomatic row.

He repeated that there would be "consequences" if Beijing breached commitments it made about rights in Hong Kong when Britain handed over control.

Speaking to BBC radio, Hunt declined to specify, but said, "You keep your options open".

"What I wanted to do was to make the point clearly that this isn't something that we would just gulp and move on – this would be a very serious issue for the UK," he said.

After Hunt first warned of "serious consequences" on Tuesday, the Chinese foreign ministry hit back by accusing him of indulging in a colonial fantasy.

The envoy was summoned to the foreign ministry in London later on Wednesday.

Hunt repeated on Thursday that he does not support the violent protesters who stormed Hong Kong's parliament, but said they should not be dealt with by "repression".

"We see this situation as a very worrying situation. And we're just asking very simply for that (Hong Kong return) agreement that we have with China from 1984 to be honoured," he said.

Chinese foreign ministry spokesman Geng Shuang told a regular press briefing on Thursday that "some people on the British side are making irresponsible remarks on the Hong Kong issue".

"The Chinese side has resolutely responded to Mr. Hunt’s mistaken statements about Hong Kong, and China's response also applies to similar statements made by other officials of the British government," Geng added.

Pro-democracy protesters rushed police barricades around the time of Monday's flag-raising ceremony marking the 22nd anniversary of the former British colony's handover to China. Police used shields, batons and pepper spray to drive them back.

That afternoon, while hundreds of thousands of people were participating in a peaceful march marking the anniversary, a few hundred protesters began trying to break into the locked legislative building by smashing thick glass walls and prying open metal security curtains.

They poured into the building that night.

In shocking scenes Monday and early Tuesday, the protesters vented their anger at a government that hasn't responded to their demands.

They spray-painted slogans on the walls, stood on the desks in the legislature's main chamber and climbed high to cover the city's official emblem with black spray paint.

Protests in Hong Kong were kick-started in March after the Beijing-backed government proposed a bill which would allow suspects to be extradited to mainland China for trial. Critics of the law and protesters said this would be a massive blow to the semi-autonomous territory's freedoms. 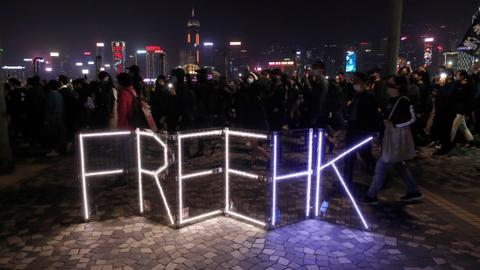