The year 2016 saw more Hong Kongers emigrate to Canada than the year before as people cite concerns about China's growing hold over the city.

As Hong Kong marks the 20th anniversary of its handover from British to Chinese rule, the increasing influence from Beijing is prompting locals to consider moving away.

Hong Kong was formally returned to China on July 1, 1997, creating the Hong Kong Special Administrative Region under a "one country, two systems" formula which is meant to come to an end in 2047. This was meant to provide Hong Kong autonomy.

But as Beijing's influence grows, many feel it is just a matter of time before the city merges into mainland China.

"When it comes to teaching history, for example, mainland China removes a lot of what we know as truth. They remove a lot of the facts," said Kelsey Chan, a resident.

"It's a form of brainwashing. I don't like this at all and it's a reason why I'm considering moving to Canada."

Chan is not alone; immigration experts say an approximate 20 percent of emigration from Hong Kong is because of politics - politics influenced by China.

Chief Executive Carrie Lam who took office on Saturday is not expected to ease the fears of Hong Kongers. Her cabinet was sworn in by Chinese President Xi Jinping as Hong Kong's fourth administration.

She aims to instil a sense of "I am Chinese" in children in Hong Kong as part of her planned education reforms.

And Hong Kongers admit they have no influence on policy. 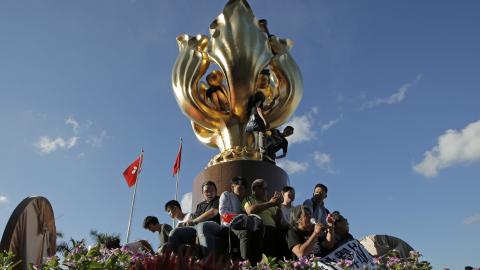