1
World Press Photo of the Year: A coronavirus hug
2
Can Covid-19 cause diabetes and heart complications?
3
Blinken meets Ghani to discuss US troop withdrawal from Afghanistan
4
EU ban on pulse fishing to remain in place after Netherlands loses appeal
5
Myanmar anti-coup activist arrested after cops crash into his bike at rally

Tongliao city police have unveiled headshots and descriptions of 129 suspects alongside a $150 reward for leads in a bid to squash protests by ethnic Mongolians against a new policy that can endanger the Mongolian language.

Chinese police have offered bounties for people accused of joining the big rallies that have erupted in the northern region of Inner Mongolia against Mandarin-only education.

Tens of thousands of ethnic Mongolians have taken part in protests and school boycotts this week, prompted by the new teaching policy that they fear will wipe out their native tongue by reducing the number of classes taught in the Mongolian language.

In Horqin district, headshots of 129 people alongside the cash reward of $150 (1,000 yuan) for leads were unveiled on Wednesday as authorities looked to extinguish dissent.

They are all suspected of "picking quarrels and provoking trouble" – a vague catch-all term used by the government to target dissenters.

Mandarin-only education affects schools in Inner Mongolia, a northern province that borders the country of Mongolia, where Mongolian has been the principal language of instruction.

Alongside textbook swaps, literature classes for elementary and middle school students will be taught in Mandarin Chinese, and students will start learning Mandarin a year earlier.

The announcement of the policy prompted demonstrations and classroom walkouts in Hohhot, the provincial capital, as well as in the cities of Chifeng and Tongliao and Xilin Gol prefecture.

The129 suspects are thought to have been "picking quarrels and provoking trouble" – a vague catch-all term used by the government to target dissenters.

Posters with descriptions including height, build, clothing and tattoos of dozens more suspects were released by Tongliao city police.

The vast majority appeared to be adults.

Tongliao, in the east of the region, has been an epicentre of the demonstrations against the new policy.

Similar education policies were previously introduced in Xinjiang and Tibet, regions with significant ethnic minority populations who have complained of repression by the Chinese government.

"Learning and using the common national language is the right and obligation of every citizen."

Baatar, a Mongolian herder in nearby Hinggan League, said that the arrest notice had sparked fear and defiance.

"We just want schools to be like how they were before. Is speaking out for your own language a crime?" said Baatar, giving a pseudonym over security concerns.

"If they come at us hard, we'll come at them hard."

A high school student in the city of Hulunbuir said students rushed out of their school on Tuesday and destroyed a fence before paramilitary police swarmed in and tried to return them to class.

“We senior students were talking and we thought we had to do something,” said the student Narsu, who like most Mongolians has only one name.

“Although this doesn’t directly affect us now, this will have a huge impact on us in the future.”

Inner Mongolia is the last region in the world where the traditional Mongolian vertical script remains in official use.

It is home to over four million ethnic Mongolians, who are vastly outnumbered by the dominant Han Chinese population.

Ethnic Mongolians hit back at the apparent attempt to sweep up ringleaders.

"It's way too extreme ... this is naked oppression of ethnic minorities," a Mongolian herder surnamed Hu in the Xilingol League area told AFP. 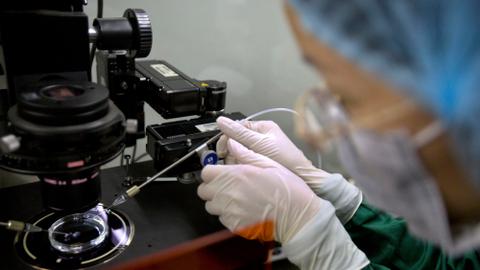 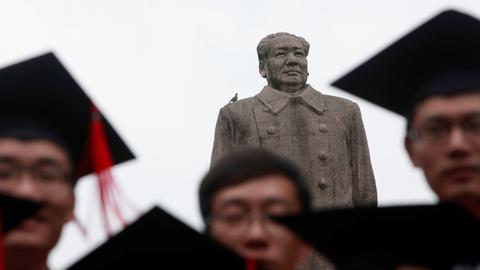 1
World Press Photo of the Year: A coronavirus hug
2
Can Covid-19 cause diabetes and heart complications?
3
Blinken meets Ghani to discuss US troop withdrawal from Afghanistan
4
EU ban on pulse fishing to remain in place after Netherlands loses appeal
5
Myanmar anti-coup activist arrested after cops crash into his bike at rally