The fire at the FR Tower, located on a busy avenue in Dhaka's Banani commercial district, was the latest in a city where building regulations and safety norms are often flouted.

A huge fire in a Dhaka office block has killed at least 17 people, an official said on Thursday, with desperate workers leaping to their deaths in the latest major inferno to hit the Bangladeshi capital.

"The death toll has risen to 17," Khurshid Alam, a fire service officer, said, adding the toll may continue to rise as rescue crews search the torched FR Tower, located on a busy avenue in Dhaka's Banani commercial district.

Earlier, some of those trapped waved frantically from the building’s windows and roof while others tried to jump to safety. Fire fighters perched on cranes smashed windows in an attempt to reach those inside, witnesses said.

Helicopters dropped water on the blaze as flames and thick black smoke poured out of the windows.

Scores of firefighters were backed by navy and air force specialists, authorities said.

Hundreds of panicked onlookers crowded the streets in the upmarket Banani commercial district.

Shoikot Rahman ran to safety after hearing colleagues raise the alarm, narrowly escaping the smoke and flames engulfing the building.

"Many of my colleagues are still trapped in the office."

There was no official word on how many people were trapped inside.

A massive blaze in Dhaka's old quarter on February 21 killed at least 70 people and injured 50 others.

A June 2010 fire in the nearby neighbourhood of Nimtoli, one of the most densely populated districts of the capital, killed 123 people.

In November 2012, a fire swept through a nine-story garment factory near Dhaka killing 111 workers.

An investigation found it was caused by sabotage and that managers at the plant had prevented victims from escaping.

Authorities are still carrying out a drive to close down illegal chemical stores and warehouses in apartment buildings, launched after the disaster in the old city. 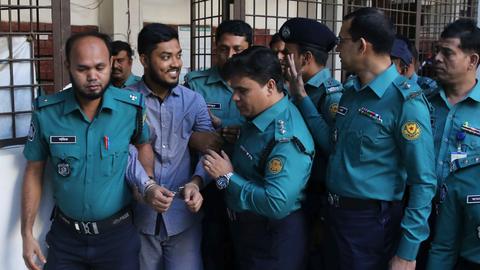