At least 14 killed in minibus blast in Pakistan

The attack targeted the mostly Shia-Muslim area of Kurram tribal district. Separately in Karachi, four suspected militants were killed in a stand off with paramilitary forces.

The attack on the vehicle in Pakistan on Tuesday killed at least 14, including four children. The roadside blast tore through the heavily-loaded pickup truck in Kurram tribal district early in the morning, according to Irfan Ali, a local administration official in the area.

Jamaatur Ahrar, a faction of the PakistanTaliban, has claimed responsibility for the attack, saying the explosive device had been intended to target the Shia minority and workers in the area carrying out a population census.

"Our target was the Shia community and census team in the area," a spokesman for Jamaatur Ahrar, Asad Mansur said.

Around nine people who sustained severe wounds were flown to the city of Peshawar.

"Among [the dead] is a baby and another nine-year-old child. Two women were also killed," Dr Mujahid Khan, a senior health official in the district said earlier.

Kurram is known for sectarian clashes between Sunnis and Shias who make up roughly 20 percent of Pakistan's population of over 200 million. It has also been a stronghold for the Pakistani Taliban as well as its factions.

Parachinar, the district capital, was the location of the first major militant attack in Pakistan in 2017, a marketplace bomb which killed 24 people in January and was claimed by the Pakistani Taliban. Last month, the Taliban targeted a mosque, killing more than 20 people in Parachinar.

Pakistan, a mainly Muslim nation of over 200 million people, is conducting a nationwide census. Militants have previously targeted officials collecting the data.

At least four suspected terrorists died in Karachi in an hours-long paramilitary operation. An infant also died in the shoot-out which took place in the city's Urdu Bazaar area on Monday, Pakistan Rangers said in a statement on Tuesday.

The Rangers raided the hideout based on prior information about the presence of the suspects. The suspects retaliated with the use of hand grenades and automatic weapons, the statement said.

Three suspected militants blew themselves up inside the hideout, while the fourth was killed when he attempted to escape from the scene.

Four personnel of the paramilitary force were also injured. 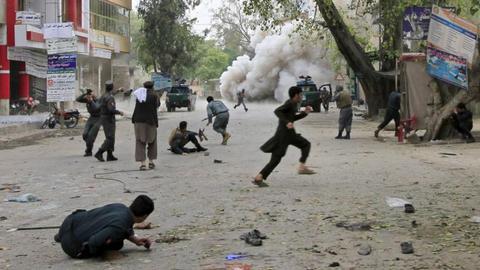