Students in their tens of thousands have brought parts of the capital, Dhaka, to a standstill since two teenagers were killed by a speeding bus.

Police in Bangladesh's capital fired tear gas on Monday to disperse hundreds of demonstrating students, while a prominent human rights group demanded the release of an activist arrested for criticising the government during more than a week of protests.

Shahidul Alam, a well-known photographer and activist, was arrested on Sunday by plain-clothed police after giving a television interview in which he said Prime Minister Sheikh Hasina has no credibility and was using "brute force" to cling to power.

Amnesty International called for Alam's immediate release, with Deputy South Asia Director Omar Waraich saying in a statement that the arrest "marks a dangerous escalation of a crackdown by the government."

The traffic chaos of the past week began easing on Monday, as immense demonstrations gave way to sporadic protests, though police used tear gas against protesters at Dhaka's East West University and students marched through the Dhaka University campus chanting anti-government slogans and demanding justice.

The protests, set off by the deaths of two students killed by speeding buses on July 29, grew last week to tens of thousands of people, becoming a major embarrassment to Hasina's government, which faces a general election later this year.

Higher punishment on the cards

Bangladesh's cabinet would consider capital punishment for traffic accident deaths, a law ministry official said, as thousands of students protested on Sunday for an eighth day over the deaths of the two teenagers in the capital Dhaka.

"In this amendment it has been proposed to award the highest level of punishment if it is killing by an accident," said the law ministry official, who has been briefed on the matter but declined to be named ahead of a decision.

The current punishment is a maximum jail term of three years. Using the death penalty for road accidents is rare anywhere in the world. Bangladesh's transport authority listed punishments given in different countries that ranged from 14 years in the UK in extreme cases to two years in India.

Sheikh Shafi, a student of a polytechnic institute in Dhaka who lost his brother in a road accident in 2015, said one of the problems was that bus drivers are not paid fixed monthly salaries instead only earn commissions based on the number of passengers, forcing them to work long hours.

"Our demand is that the owners must appoint them and they will work a maximum of 10 hours. The commission based system must be eliminated," said Shafi, who was injured while protesting on Saturday.

The roads of Dhaka are a web of gridlock and chaos. Unlicensed drivers, unregistered vehicles and speeding buses are commonplace, police corruption is rife and traffic enforcement often nonexistent. At least 12,000 people die each year in road accidents in Bangladesh.

The demonstrating students have stopped thousands of vehicles during the protests, including those of top officials, checking if the cars were registered and the drivers licensed. 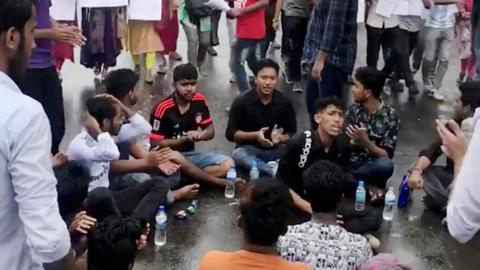 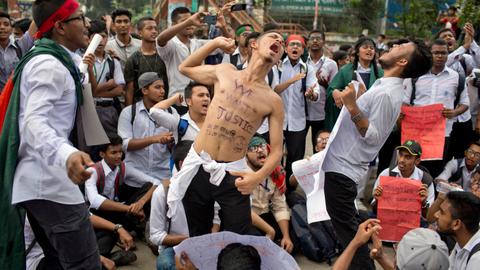