No claim of responsibility in deadly Kabul attack

There has been no claim of responsibility for the attack in the capital Kabul that killed at least 21, but the Taliban has targeted the court and its staff in the past.

A suicide bomb attack on the Supreme Court in the Afghan capital killed at least 21 people and wounded 41 others, officials said on Tuesday.

There was still no claim of responsibility on Wednesday. But the Taliban has claimed similar attacks in the past.

The assailant in Tuesday's attack targeted a bus in the parking lot as employees were boarding to go home.

The health ministry also warned that the death toll would likely rise.

Taliban targetting courts and their employees

The Supreme Court was previously targeted by a bomb in 2013. A suicide bomber rammed a car packed with explosives into a bus carrying court employees and killed 16 of them.

In 2015 a Taliban bomber killed five prosecutors from the Attorney General's office in Kabul.

The same militant group killed four people at a provincial courthouse in Ghazni in 2016.

Last month, the Taliban claimed an attack in which bombers killed more than 30 people and wounded about 70 in twin blasts in a crowded area of Kabul during the afternoon rush hour.

The UN on Monday reported a spike in civilian deaths in Afghanistan in 2016, including more than 900 children.

Afghan government forces control no more than two-thirds of national territory, and have struggled to contain the Taliban since the bulk of NATO soldiers withdrew at the end of 2014.

Several thousand foreign troops, most of them Americans, remain in training and counter-terrorism roles. 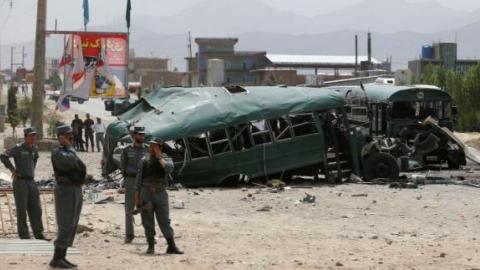