Few expect a concrete deal to emerge from the five-day talks involving 17 rebel groups in Naypyidaw as other rebel factions remain locked in combat with the military.

Peace talks between Myanmar's government and warring ethnic minorities kicked off Wednesday in a bid to end decades of conflict that have claimed thousands of lives and kept the country mired in poverty. Aung San Suu Kyi kicked off the talks with an appeal for unity in her opening remarks.

A sea of colour filled the vast conference hall in the capital Naypyidaw as delegations from Myanmar's myriad ethnic groups mingled with stony-faced military officers decked out in full regalia.

The summit is veteran democracy activist Suu Kyi's much-trumpeted effort to reshape Myanmar as a federal democracy following decades of oppressive military rule. The Nobel laureate has made bridging the ethnic fault lines that have fractured the nation since its mid-century independence a priority of her new government, which took power in March. Her administration faces sky-high expectations at home and abroad after sweeping to power, ending more than half a century of military-backed rule

"So long as we are unable to achieve national reconciliation and national unity, we will never be able to establish a sustainable and durable peaceful union," she told delegates.

"Only if we are all united will our country be at peace. Only if our country is at peace will we be able to stand on an equal footing with the other countries in our region and across the world."

United Nations Secretary General Ban Ki-moon, who is attending the talks, described the gathering as a "historic" moment for the country following its transition towards democracy.

"The long civil war has cost numerous lives and robbed successive generations of their dignity, tranquillity and normalcy," he said during a speech to delegates," said Ban.

"It is now clear that there can be no military solution to your differences."

Earlier on Tuesday, the UN chief had said Myanmar's stateless Rohingya should be given the right to citizenship after generations of living in the country.

Many from the million-strong Muslim minority are denied citizenship, voting and work rights, and are reviled in overwhelmingly Buddhist Myanmar.

More than 120,000 have been displaced, many to squalid displacement camps in western Rakhine state, after fleeing violence stirred by Buddhist nationalists in 2012.

Thousands have fled to other Southeast Asian countries on rickety boats in search of better lives, only to drown or fall victim to human traffickers.

Few expect a concrete deal to emerge from the five-day talks, which are seen as the start of a peace process that could take years.

3 ethnic armed groups that are not allowed to the UPC are AA, MNDAA and TNLD as they been refusing to lay down their arms. #Panglong

At least 17 rebel groups have joined the talks in the capital, but others have not laid down their arms and some remain locked in combat with the military.

Any hope of a nationwide ceasefire has been snuffed out by fresh flare-ups of violence in some northern states ahead of the summit.

Khua Uk Lian of the Chin National Front, which has its own ceasefire with the military, said he was optimistic but warned fighting would be hard to stop on the ground.

"You have local commanders fighting about local problems," he told AFP. "It's been like this since we have been fighting."

Communities in the conflict zones live in stark poverty despite the rich jade, tin and teak wood forests that dot their lands and lie at the heart of many of the battles. Bringing peace could rejuvenate economies in the war-ravaged regions, and open up investment to foreign powers who are keen to scoop up its vast resources.

But distrust of the Tatmadaw, as the Myanmar military is known, runs deep among minorities after decades of oppression, marked by torture, rape and mass killings.

Negotiators from Suu Kyi's government have said privately they are hamstrung by working with the army, which still controls borders, defence and a quarter of parliament seats.

"We need to end this tragic drift," he told the conference.

But he also warned against drawn out peace talks.

"If the peace process takes longer than the appropriate time, there may be more outside instigations, interferences and manipulations disturbing the process," he said.

A historic deal on hiatus

The deal collapsed after he was assassinated, before Myanmar broke from Britain in 1948, triggering civil wars that have rumbled across the country's borders ever since.

Suu Kyi has dubbed her summit the '21st Century Panglong' in reference to the agreement brokered by her father, who remains a deeply revered figure. 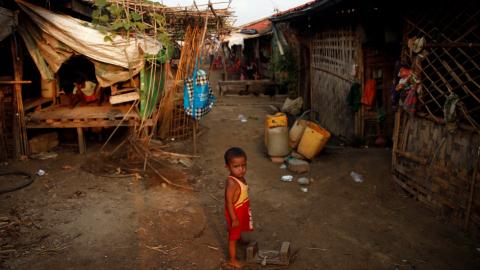