The mission to save five people still trapped inside the cave could take three or four days, officials have said, a race against the clock with heavy rain expected this week

The health of five people still trapped inside a flooded Thai cave was "still good", the head of the rescue mission said on Monday, after confirming that four more boys were brought out safely from the cave complex.

All four were transported by helicopter to a nearby hospital, where they are currently being monitored.

A 12-member football squad and their coach were trapped inside the Tham Luang caves for more than two weeks. Eight have been rescued so far in an operation that began on Sunday.

Thirteen foreign divers and five members of Thailand's elite navy SEAL unit make up the main team guiding the boys to safety through narrow, submerged passageways that claimed the life of a former Thai navy diver on Friday.

Narongsak said that the "same multinational team" that went into the cave on Sunday to retrieve the first four boys was deployed on Monday.

"The prime minister said that this kind of event should never happen again on Thai soil," Narongsak told reporters.

"We should learn from this experience to prevent it from happening again."

He said the PM who visited the cave site has gone to visit all eight boys in the hospital.

The mission to save all the trapped could take three or four days, officials have said, a race against the clock with heavy rain expected this week which would again flood the tunnels with fast-flowing, rising water.

The president of football's governing body, FIFA, has invited the boys to the World Cup final in Moscow on Sunday if they make it out in time. 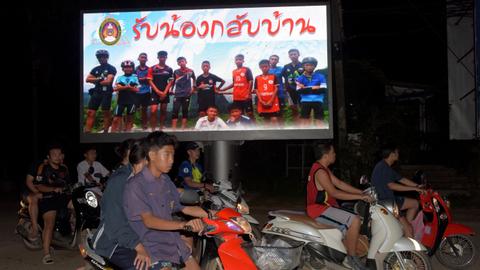