Hong Kong police on Wednesday arrested pro-democracy demonstrators, including student protest leader Joshua Wong, a day before Chinese President Xi Jinping is due to arrive for celebrations in honour of the city's handover from Britain to China.

Hong Kong marks July 1, 1997 – the 20th anniversary of the handover of the city from British to Chinese rule – amid calls for democracy and fears of creeping influence of Communist Party leaders in Beijing undermining the "one country, two systems" formula under which it operates.

Police said the demonstrators, including Wong who helped lead the 2014 Occupy street protests, were arrested for causing a public nuisance.

Protesters have demanded full democracy for the city and the unconditional release of Nobel Peace Prize-winning activist Liu Xiaobo, who was recently diagnosed with terminal liver cancer.

Around 30 protesters, including Wong, gathered at Forever Blooming Golden Bauhinia statue on the Wan Chai waterside, a gift to Hong Kong from China.

"We want to tell Xi Jinping that Hong Kong's prosperity is just a facade," Wong said. "When democracy is not in sight, we need to take action to confront this system," he added.

"Before the visit of Xi Jinping, it is time to urge the Chinese president, a hardliner, to release Liu Xiaobo."

He shouted: "Hong Kong people, don't give up. Protest on July 1!" as four policemen carried him into a police van.

Right next to the statue, staff were making preparations for the celebrations and lining up hundreds of chairs for guests to observe the flag-raising ceremony on Saturday.

A couple of hundred Chinese tourists gathered for the sunset flag-lowering ceremony.

"It will be the 20th anniversary of the handover. Foreigners will be watching. This is not good for the image of Hong Kong," a 58-year-old tourist from the southern Hainan province of China said, giving her surname as Fu.

Tens of thousands are expected to join an annual pro-democracy demonstration on Saturday.

Xi is due to arrive on Thursday afternoon and make a speech before joining celebrations to mark the handover on Saturday when he will also swear in the city's next leader, Carrie Lam. 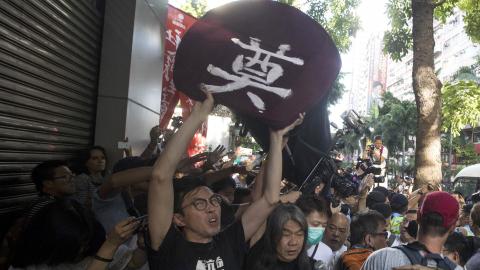 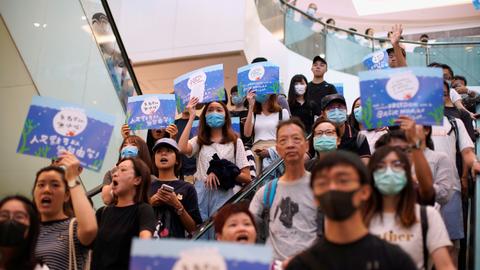