Police in Hong Kong have cleared a crowd of protesters gathered outside the city's legislature after several hundred broke into the building and spray-painted pro-democracy slogans on the walls.

Hong Kong police retook parliament from protesters early Tuesday after firing tear gas to disperse hundreds who ransacked the building in a day of unprecedented chaos and political violence on the anniversary of the territory's handover to China.

The financial hub has been rocked by three weeks of huge demonstrations against an unpopular bill that would allow extraditions to the Chinese mainland.

They ransacked the building, daubing its walls with anti-government graffiti in an unparallelled challenge to city authorities.

Police warned of an impending crackdown and just after midnight officers moved in from several directions, firing tear gas and wielding batons as they charged, sending plumes of smoke drifting across the heart of the financial hub and scattering the demonstrators.

Earlier in the day, huge crowds of peaceful democracy activists staged a march calling for the city's pro-Beijing leader to step down and reverse what they see as years of sliding freedoms.

But the atmosphere deteriorated as Monday wore on and a hardcore group of protesters breached parliament after hours of siege.

Protestors successfully smashed their way through reinforced glass windows and pried open metal shutters that were blocking their way.

The small group of mostly students wearing hard hats and masks used a metal trolley, poles and pieces of scaffolding to charge again and again at the compound's reinforced glass doors, which finally gave.

The small group of mostly students wearing hard hats and masks used a metal trolley, poles and pieces of scaffolding to charge again and again at the compound's reinforced glass doors, which finally gave.

Journalist Joel Flynn has more on the tense situation.

Footage broadcast live on i-Cable News showed dozens of masked protesters, many carrying makeshift shields, swarming into the entrance of the building after hours of forcing their way in.

Once inside they tore down portraits of the city's leaders, hoisted a British colonial-era flag in the main chamber and sprayed the city crest with black paint.

"There are no violent protesters, just tyranny," one banner that was hoisted above the podium read.

"Hong Kong is not China," read another.

Riot police, who had earlier used pepper spray to try and beat the protesters back, appeared to have retreated deeper inside the complex.

The protesters stormed the legislature on the anniversary of the city's 1997 return to Chinese rule on Monday in a direct challenge to Beijing, amid widespread anger over laws that would allow extraditions to China.

In response to the protestors, the council, the mini-parliament in the former British colony, issued a red alert, ordering the protesters to leave immediately.

It did not say what would happen if they didn't.

Hong Kong leader Carrie Lam suspended the bill on June 15 after some of the largest and most violent protests in the city in decades, but stopped short of accepting protesters' demands to scrap it.

The Beijing-backed leader is now clinging on to her job at a time of an unprecedented backlash against the government that poses the greatest popular challenge to Chinese leader Xi Jinping since he came to power in 2012.

"The kind of deafness that I see in the government this time around despite these protests is really worrying. The complete disregard for the will of the people is what alarms me," said Steve, a British lawyer who has worked in Hong Kong for 30 years.

"If this bill is not completely scrapped, I will have no choice but to leave my home, Hong Kong."

Tens of thousands of protesters clogged streets in and around the Legislative Council on Monday night. 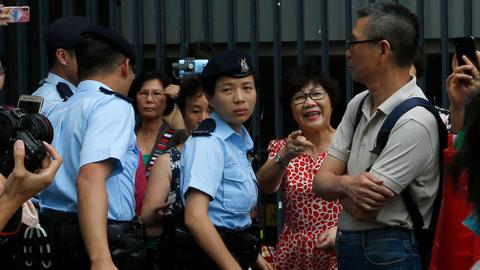