Bombay High Court acquits a 39-year-old man charged with groping a 12-year-old girl because there was "no skin-on-skin contact," sparking outrage.

An Indian court has found a 39-year-old man not guilty of sexually assaulting a child in 2016 because the act was committed with her clothing still on, sparking outrage and frustrating rights activists.

Last week Bombay High Court judge Pushpa Ganediwala acquitted the man who had lured a 12-year-old girl to his house, groped her chest, and attempted to remove her underwear.

Justice Ganediwala dropped his three-year prison sentence to one year, convicting him of the lesser charge of molestation because there was "no skin-on-skin contact," meaning the crime did not fit the definition of sexual assault, CNN reported on Tuesday.

The offender appealed to the High Court after being found guilty of sexual assault and "sentenced to three years in prison in a lower court."

"Considering the stringent nature of punishment provided for the offence, in the opinion of this court, stricter proof and serious allegations are required," Ganediwala said.

"It is the basic principle of criminal jurisprudence that the punishment for an offence shall be proportionate to the seriousness of the crime."

of women in general but also put all the women under ridicule and has trivialized the legal provisions provided by the legislature for the safety and security of women.

Activists, lawyers and organisations campaigning for the rights of sexual assault victims condemned the court's decision, saying it sets a precedent for all other high courts and lower courts who may follow suit.

The National Commission for Women said on Twitter it will challenge the judgement as it will have a "cascading effect on various provisions involving safety and security of women."

Worst place to be female

In India, a rape is reported every 15 minutes on average, according to 2018 government data, underlining the country's reputation as one of the worst places in the world to be female.

Women reported almost 34,000 rapes in 2018, barely changed from the year before.

Just over 85 percent led to charges, and 27 percent to convictions, according to the annual crime report released by India's Home Ministry. 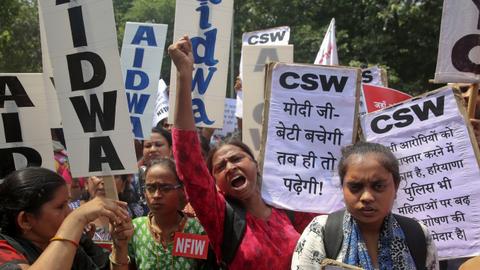